Rangers secured a clash with Russian side Ufa for a Europa League group stage place after their 0-0 draw against Maribor saw them win 3-1 on aggregate. Steven Gerrard’s side faced an even sterner test in Slovenia than they did at Ibrox last week, but a strong defensive display saw them resist the hosts’ much improved attacking threat. 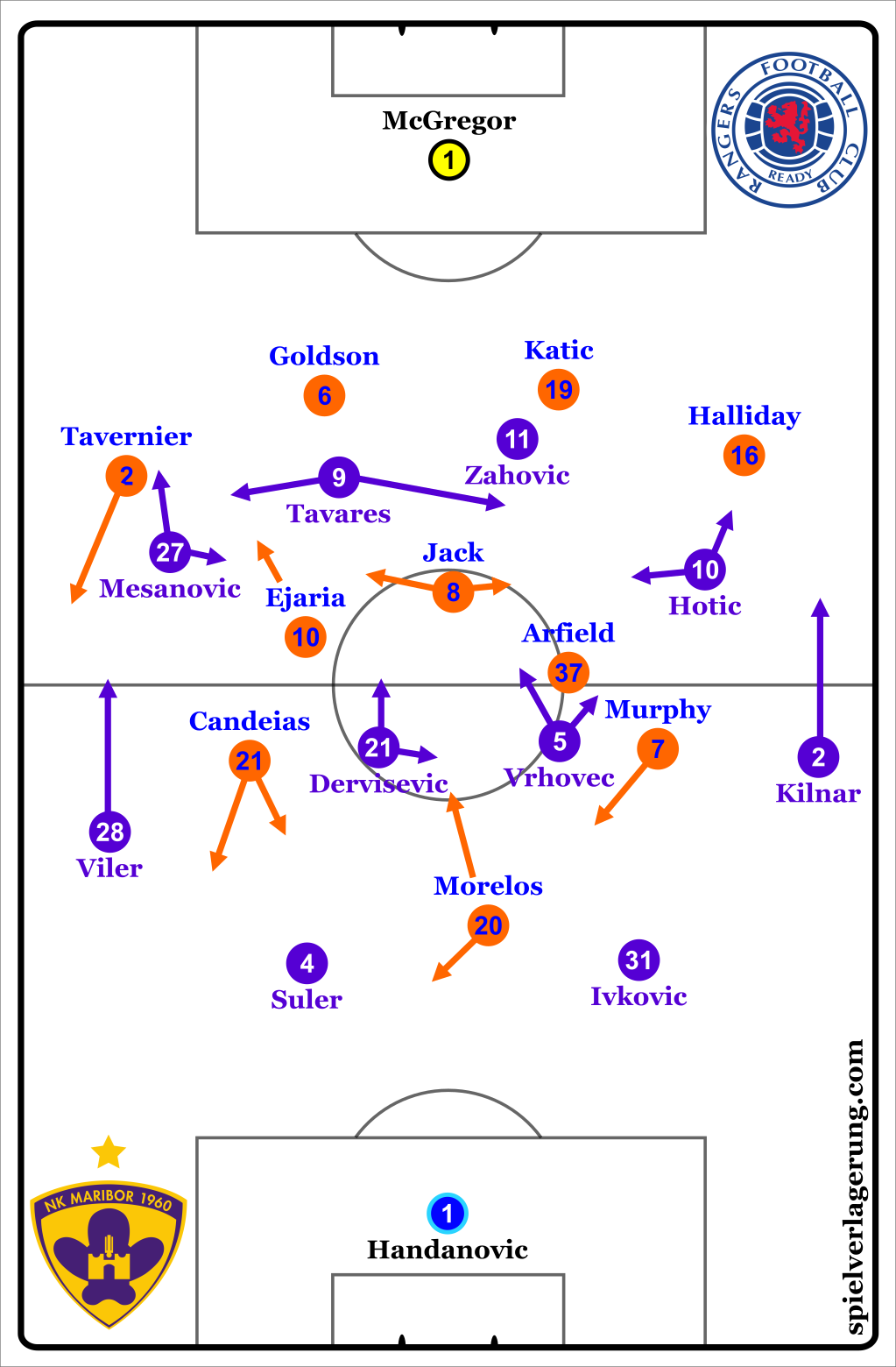 Rangers defended from a compact 4-3-2-1, protecting the centre and aiming to win the ball in wider areas. Murphy and Candeias man marked the two sixes, the highly influential Dervisevic and Vrhovec, with the three midfielders behind them very narrow, blocking routes through to the active Maribor front line.

Rangers’ strong occupation of the centre forced Maribor to the flank early in their build-up, though the rather strict man-orientations around the home side’s six-space left Murphy and Candeias detached from the higher pressing of Morelos. Through a deep-lying and well-structured build-up triangle with the back two and goalkeeper, the Colombian’s efforts were brushed away with relative ease.

This rather limited access that Rangers had to the Maribor fullbacks before they advanced encouraged the Slovenians to use them heavily in the build-up. Hotic moving into the right halfspace allowed Klinar to gain space through forward runs, though the progress made by the right back was limited due to the strong spatial compactness Rangers created around this area. Vertical passes were well blocked by Arfield and the covering Jack, either six positioned nearby brought with it the customary presence of their marker, while quick combinations were rarely attempted by the home side.

Instead they looked to progress by moving the ball elsewhere. However, switches through the back line to the opposite fullback in the home side’s build up were met by the outwards pressing of the ball-near eight, giving the closest attacking midfielder time to recover and reapply pressure on their man with Jack once again shifting to block passes to the forward line with his cover shadow. Furthermore, with the Rangers midfield three shifting across narrowly, and with Maribor not particularly present in advanced central areas at these moments, there was little opportunity to play back inside immediately.

Though this level of compactness made Rangers very difficult to break down, it also caused them some problems of their own. The short distances between Rangers’ midfielders as they pressured the ball on the wing, and the 3-2 staggering in which they were positioned, gave them little to no access to the opposite side of the pitch, namely the far fullback receiving Maribor’s numerous switches of play.

This in itself is not a great issue. The Rangers midfield showed repeatedly early on that they were capable of shifting across in a disciplined way to block forward progression by the time the far fullback received the ball, without ever putting him under great pressure high up. However, as the half progressed, Ejaria began more and more often to press the left back over a large distance. In doing so, he disconnected himself from Ryan Jack, leaving the central of the three midfielders unable to cover the space left behind. 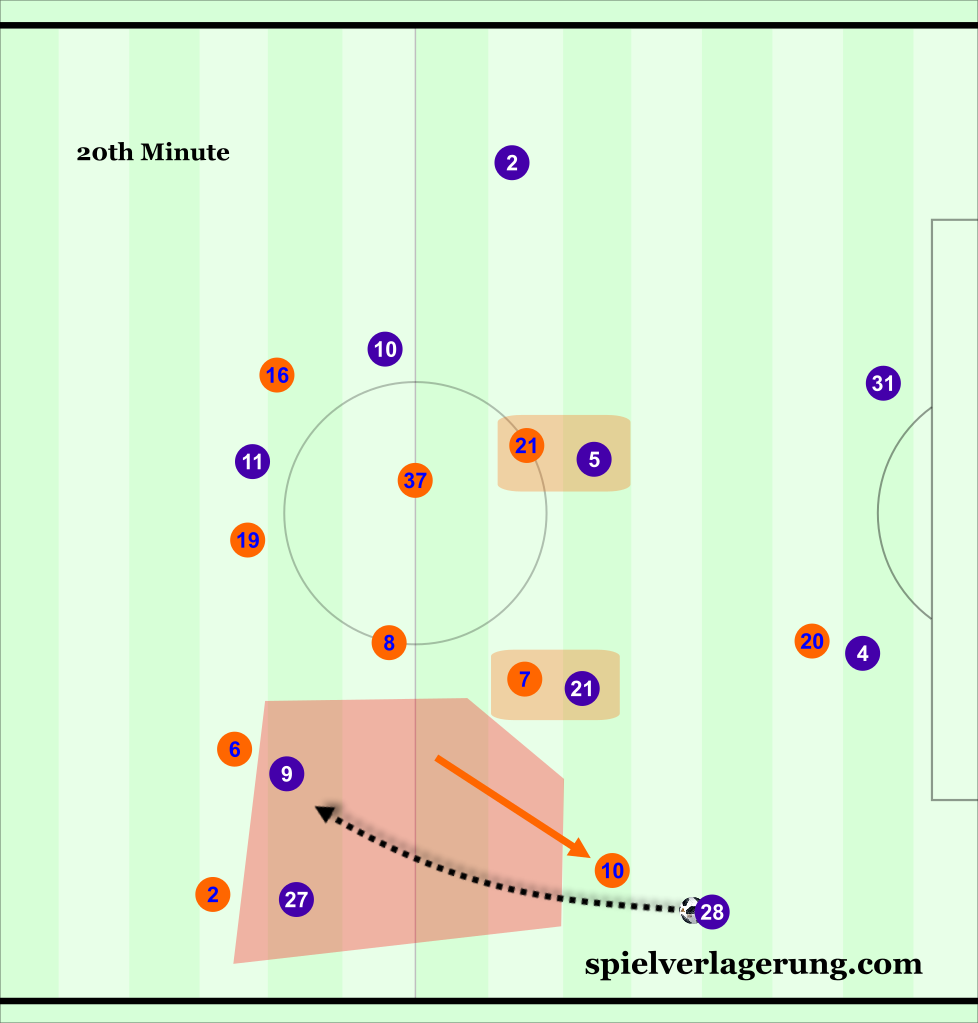 Ejaria’s eagerness to press the left back leaves the halfspace open for Tavares.

It was through this space that Maribor were at their most incisive. Tavares was, of course, pivotal in these moments, available for half-long curved passes from the left back, protecting the ball from Goldson as he received it, combining with Mesanovic or other nearby teammates, before consolidating the home side’s position in the final third or continuing the attack. In these positions, Vrhovec and Dervisevic could jump and join the attack, running off the back of their marker, who had been focused on preventing them from receiving on the other side moments prior (JD’s excellent theory piece on dismarking discusses these receiving patterns in depth).

Other routes into Rangers territory were also used, with the Slovenian side typically dynamic in higher areas. Marcos Tavares picked up from where he left off in the first leg, dropping into midfield to briefly connect play and bring Maribor to the final third with his strong, short dribbles. Positioned around Ryan Jack’s zone, he was able to receive the ball thanks to the sixes’ well-orchestrated manipulation of their markers, unable to block passes or retain compactness due to their defensive assignments. The movement of Hotic and Mesanovic in the halfspaces gave the Slovenian side yet more options, as did forward forays by Vrhovec in particular.

Upon gaining entry to the final third, Maribor pinned their guests back, attacking them with very high fullbacks and crosses. Such was Rangers’ focus on the central area and compactness around it, they had little means to prevent crosses from the flanks, though they generally prevented the home side from penetrating through the middle.

The lack of wingers in their defensive structure gave them little counter attacking threat, which allowed Maribor’s fullbacks on both sides to advance further still. Overhit crosses and wide clearances were therefore recycled and converted into yet more attacks on the Rangers box. The amount of central bodies Rangers had defending the box, though, as well as their staggering, made it difficult for Maribor to find spaces for good central shots, with many being blocked. 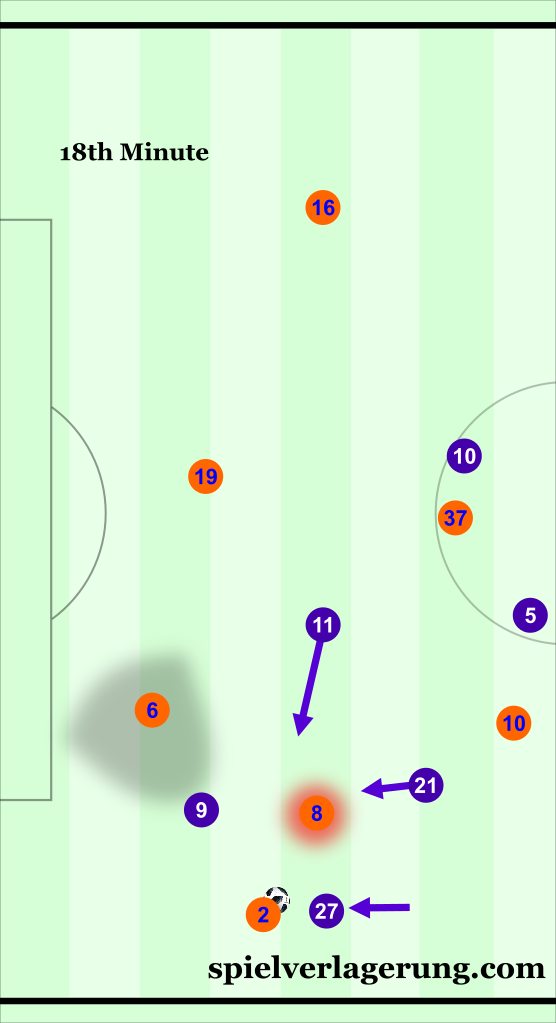 Maribor’s central midfielders were allowed to be active in their pressing thanks to the well-coordinated efforts of the forward line and wingers.

Rangers, meanwhile, were considerably more direct with the ball than they were in the first leg. This was probably at least in some way a psycho-tactical effect, with Steven Gerrard’s side bringing a 3-1 lead to Slovenia, and thus not being compelled to take risks – especially considering the implications of the away goal they conceded at Ibrox.

However, personnel and role differences, as well as changes the home side made to their approach, also influenced Rangers’ style of play. Rangers last week brought the ball out from the back with asymmetric fullbacks – Tavernier pushing on the right side, while Flanagan stayed deeper on the left, temporarily creating a back three. Maribor’s strikers in their 4-4-2 struggled to prevent Flanagan or Goldson advancing uncontested towards the midfield, with the spaces either side of Tavares and Zahovic both reachable and open. Halliday, though, acted more traditionally at left back, allowing the Maribor front two direct access to Rangers’ deepest line. If the visitors did form a back three in their build-up it was through the dropping of Ryan Jack, with little adjustment in the spacing of Goldson and Katic, and with the opposing forwards actively discouraging an easy switch.

Maribor were also far more active in their midfield pressing. Both sixes readily supported Tavares and Zahovic as they pressured the centre backs, stepping forwards to maintain access to the somewhat reserved Rangers midfield line. Meanwhile the coverage of central options forced Rangers themselves to the fullback areas, where they were easily reachable by Maribor’s wide midfielders. The combination of the ball-far striker moving infield and the near central midfielder pushing up created particularly high pressure in these areas, sending Rangers direct down the line.

Brief glimmers of a familiar style

Efforts to play through these spaces were occasionally made nonetheless, particularly on the right. Small overloads around the right back area were formed, either through Jack using his individual press resistance to partially crack open the Maribor position, or through Ejaria. The Liverpool loanee at times pushing Tavernier higher outside him, creating adaptable, flexible structures, and momentarily improving the Steven Gerrard’s side’s ability to play around the pressing.

Though much of their play was pushed towards the wings, it was through the centre that 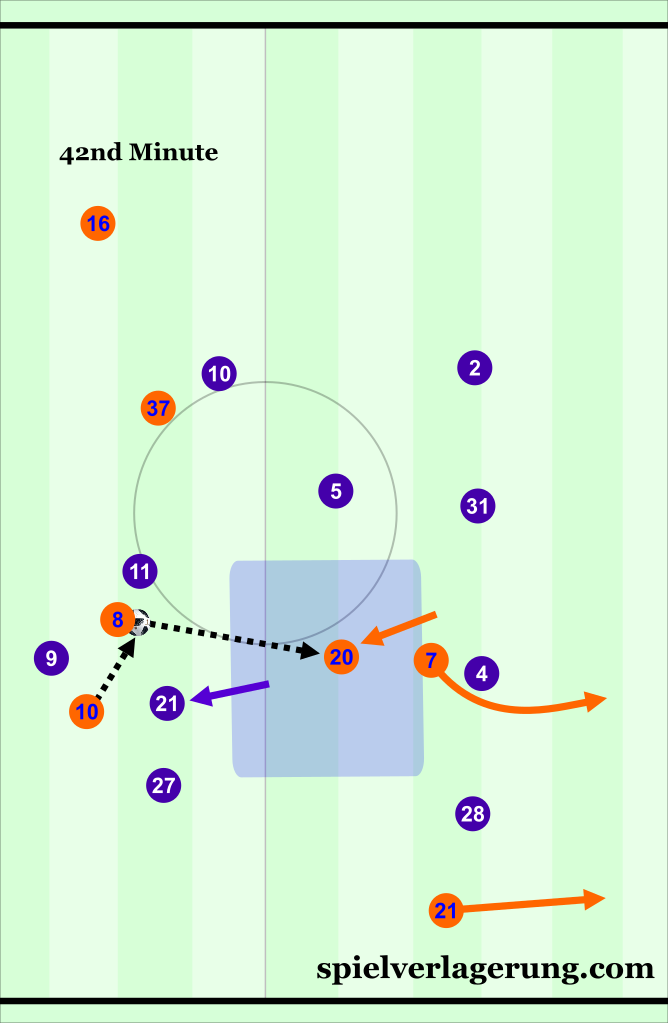 Rangers’ small-scale overloads near the right back position help solve the earlier problems posed by Maribor’s pressing there. Morelos drops into midfield, assisted by the depth-giving runs of Murphy and Candeias.

Rangers had their most promising moments of possession. Candeias’ role so far under Gerrard has differed greatly from last season, with the Portuguese midfielder appearing more commonly in central positions as opposed to the right-wing berth he made his own in his first season in Scotland. From there, he linked up very effectively with ‘inside forward’ Jamie Murphy, particularly when overloading the central and half-right areas behind Dervisevic.

Additionally, the pair’s proximity to Morelos was useful in retaining possession after direct play towards the lone striker through small combinations or immediate counterpressing. Their dynamic with the club’s top scorer last season further came to light as the game progressed, with Morelos dropping effectively into midfield to receive behind the Maribor sixes unmarked. Murphy and Candeias giving depth served to push the defensive line back, allowing the Colombian forward to turn and attack the back four directly.

Against a team who will consider themselves of Champions League quality, Steven Gerrard will no doubt be very pleased with his team’s performances over the two legs, and the results they have achieved as a result. Rangers’ defensive organisation continues to show signs of improvement, and though key spaces were left open in their pressing, the individual aggression and intensity in their final third defending ensured that they returned to Glasgow with a clean sheet and a spot in the next round.