Back threes and fives remain unbeatable at this World Cup. Back fours are dead.  And oh shit, Costa Rica is good!

Italy wanted the center – and Costa Rica knew that

Costa Rica was able to use Italy’s focus on the center of the pitch to their own advantage. Off the ball they showed a bold organization of their midfield. They formed their defense in a narrower 5-4-1 that was higher and more flexible. 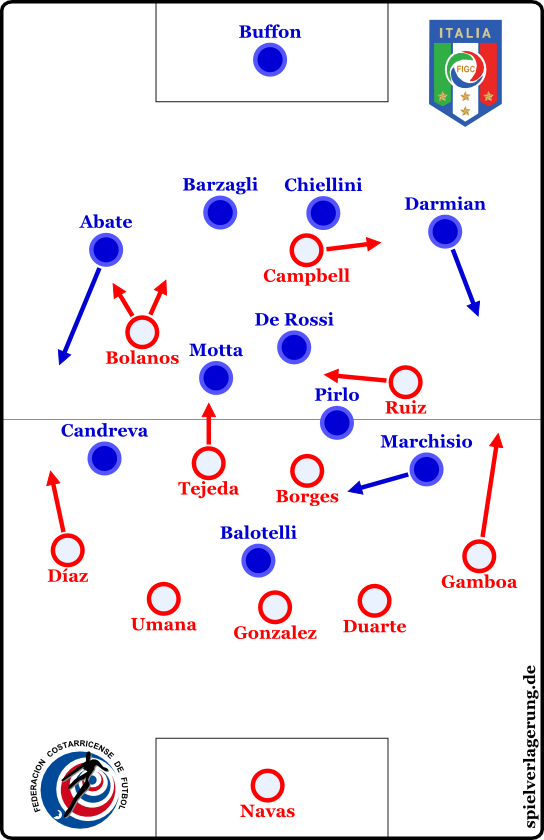 They switched from a basic 4-1 block into a compact 3-2 block in the center. This 3-2 block consisted of three compact triangles and allowed for greater access than the withdrawn 4-1. Campbell was was usually positioned a little to the right so that he could push Pirlo out of Italy’s buildup. On the left side, Bolanos either took up a half left position or Tejeda pushed up aggressively. Borges and Ruiz then advanced very well and always based their position on Pirlo. The Italian playmaker dropped deeper as he found it very difficult to play. Because of the well organized block of five around the center, the Italians could not effectively employ their usual ball circulation.

Instead, the Italian full-backs had a lot of space, but Italy’s leisurely rhythm often prevented them from causing damage. Darmian, especially, had large gaps in front of him, but it was obviously not in the game plan to integrate the moderate offensive qualities of the more defense-oriented all-rounder. There were hardly any shifted balls to him. If any balls were played to him, Costa Rica reacted with a very strong, early attack from their wing-backs. Gamboa in particular appeared very suddenly and dynamically next to the midfield line. It was again impressive that the rest of the players then formed clean lines of four when a defender left position, because nothing wobbled. Everything was planned and well rehearsed. 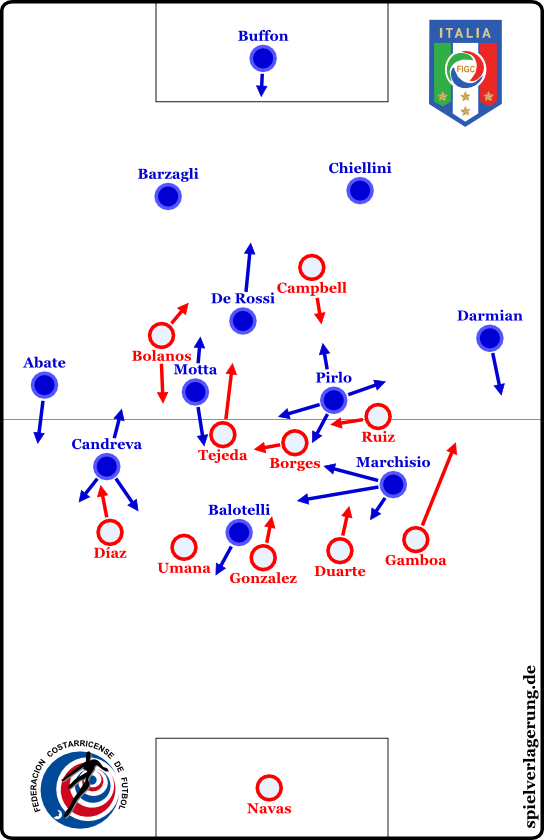 This also applied when one of the three central defenders pushed up to take on a player in the intermediate line space. This kept Costa Rica’s line relatively high, which turned out to be a good fit: the distance from Pirlo to the striker was greater and it was difficult to play long balls behind the defense and easier for Costa Rica to defend. Pirlo had one good ball over the top to Balotelli in the 30th minute, but the opportunity was squandered.

Otherwise, Italy’s offensive options were easy to guess. Costa Rica’s organization crippled everything they tried: Motta was hardly involved as he was trapped in the cover shadow of the 3-2 block and could contribute barely anything. Marchisio tried to overload in different zones but rarely found any connection in the intermediate line space and then was mostly blocked by a defender pushing up. Candreva’s role on the right was unclear. He and Abate operated together to provide width, which worked against the game plan and was inefficient. Balotelli saw little light against the back three. He did manage to achieve a pass completion rate of 100% – but only played a miserable twelve passes.

Italy does not run behind – and Costa Rica knows that

Even with the ball the Costa Ricans, in their 5-4-1 formation, could exploit the Italian’s focus on the center of the pitch. First, the three central defenders had no problems circulating the ball against Balotelli. The full-backs pushed high, and were often sought by shifted balls. Since the Italians barely push out to the wing, this functioned well and accounted for a lot of Costa Rica’s play in the first half. 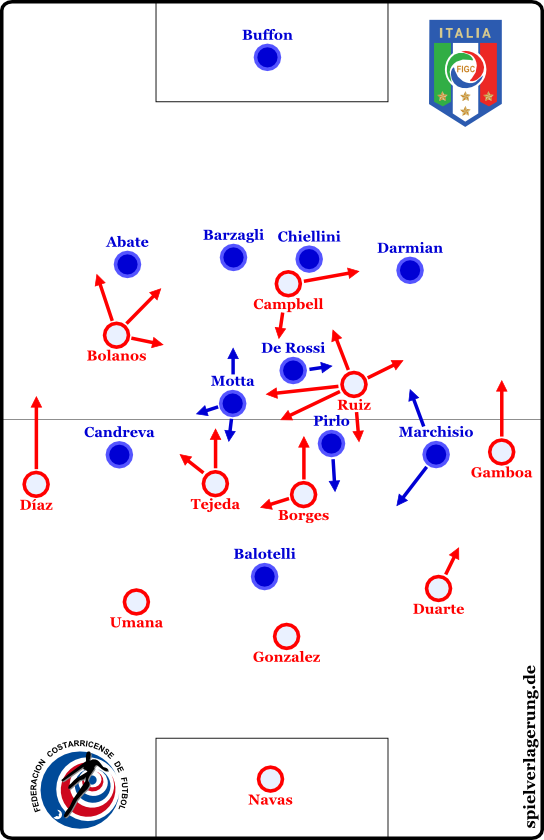 This surprisingly patient ball circulation has been fostered by the free role of the outstanding Bryan Ruiz. He shuttled through the midfield space, mainly in front of the holding midfielders – and lured the Italians forward with very safe combinations (pass rate 90%) into the center. However, Italy’s three skilled sixes proved adaptable and stable and prevented penetration into higher zones. But, they found no access and could not move out wide to support the ball circulation. Pirlo occasionally moved centrally, while De Rossi and Motta formed a double six, but even then Pirlo had to stay quite deep. Furthermore, the combinations to Marchisio dragged him into the path of Gamboa.

These good efforts were ultimately not the right way to penetrate the backline, but they allowed Costa Rica a lot of presence and choices to move the game forwards. If they could then penetrate into the final third, they accelerated the game very intensely and played directly into the box. Mostly there was a shifted pass to Bolanos or Diaz on the left wing. Not only the striker, but also both sixes then moved aggressively into the box. Often this led to hectic, unpredictable crosses, and in the first half hour, these attempts were often not dangerous. Ultimately, Borges beat Barzagli with a run to the near post and Ruiz headed home at the far post via a cross from Diaz.

Pushing up and compactness against Cassano and Insigne 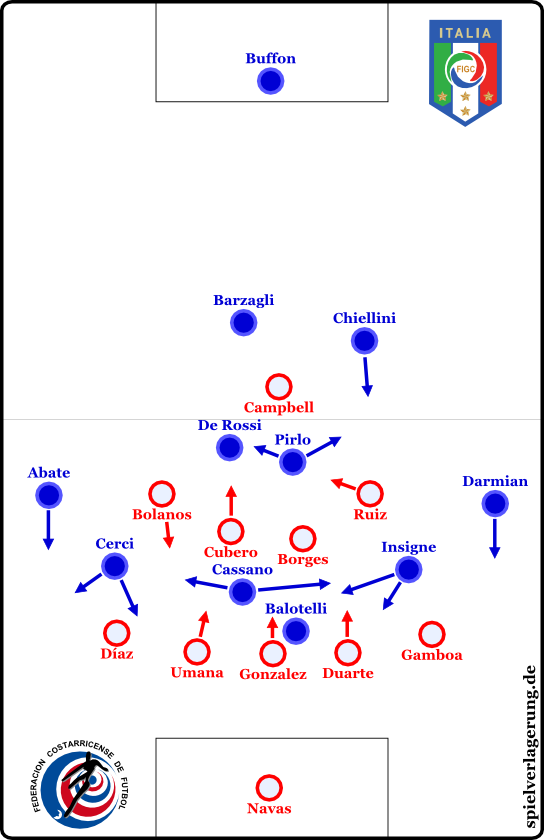 Italy’s offensive game in the second half.

For the second half, Prandelli then switched to a 4-2-3-1 by bringing on Cassano for Motta. Costa Rica, however, dropped deeper and fixed their midfield pressing back into their own half. The double six of De Rossi and Pirlo were now in front of the opponent’s midfield, while the offensive line of three (Cerci, Cassano, and Insigne) moved into the intermediate line space.

After a fairly impressive Italian quarter of an hour, Costa Rica got the upper hand again. Here, the midfield played surprising far ahead of the defense and very narrow. But the stretched intermediate line space was repeatedly used as pressing the trap by one of the defenders pushing out very early, while withdrawing the midfield and preventing passes backward. A large amount of Italian attacks failed in such situations. The retracting dynamics of the midfield and the situational back four, with the simultaneous extra pressure from the pushing up of one defender, destroyed the Italian rhythm and repeatedly forced hectic passes and turnovers. Cassano only managed a pass completion rate of 58%. Example of a Costa Rican defender pushing up. Italy overloads the space between the lines, but only one pass is possible because of Tejeda’s move. This allows Umana to push up very early on Candreva. He cuts off all three other Italians in the center with his cover shadow. Borges pushes over to secure the central space. Tejeda and Ruiz and slide over to cut off the back pass options.

Italy’s horizontal circulation went missing at this stage in the six space. De Rossi and Pirlo were usually very close to each other and played vertical passes from very basic static positions. The combination of the cover shadow and the opposition six pushing up provided for great predictability as there was usually only one passing option. This was an important reason that the pushing up of the defenders was so effective – they could anticipate simple passes very early. All in all, Italy’s offensive structure was much too clear and one-dimensional. In addition, the full-backs provided little pressure. Their high position only served to benefit Costa Rica in the occasional counterattack.

Dynamik, compactness, excellent coordination, and flexibility characterize the pressing in Costa Rica’s 5-4 1 and made for an absolutely deserved victory. The back five ensures that they can always push an additional player into the midfield when the ball is close. In the first 25 minutes of the game they had only a single shot. In the last 25 minutes, only two. Also, the build-up play and the counter attack of the underdogs was convincing. The attacking play was very simple, but enough for a goal.

Italy did not have a bad game – they played quite similarly to their first game – but again found little connection on offense and could not cope with their extraordinary opponents. Pirlo’s genius was almost enough to lead them to victory, but that would have been ultimately undeserved. The balanced shot statistic rather flatters Italy. This game was not a result of the unlucky favorite’s failure to convert chances; in this very special game the underdog was at just a little bit better.

Bit of background thought: We have discussed such a “5-0-4-1” with a defender pushing out here. Interestingly, it was a matter of an antidote for a system that was not entirely dissimilar to Italy’s in the second-half, at least in terms of the basic formation, the reduced ball circulation, the full-back-use and the low connection between defensive and offensive midfield.

Thanks at Levitra Super Active rezeptfrei @rafamufc for the translation!