Hertha BSC is celebrating their best start to a season ever. They convince with their strong transitions during their 1:0 victory over HSV. On the other hand, HSV is missing the right kind of balance. 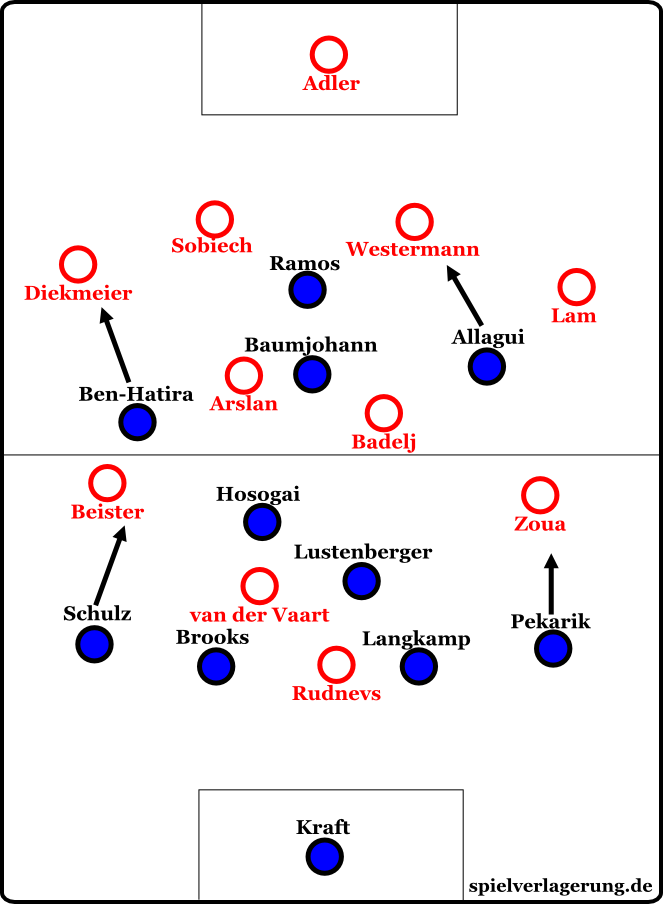 Basic formations at the start of the game. Please mind: Zoua and Beister as well as Allagui and Ben-Hatira switched positions frequently.

Most people are not enthused to celebrate their 50th birthday – who likes to admit that more than half their life is gone after all? 50 years of Bundesliga left their mark on HSV coach Fink as well, he turned his back on the experiments of the past two weeks and became more conservative. He changed his system and fielded Rudnevs as a classic forward. HSV employed a 4-2-3-1 turning into a 4-4-2 in defense. Hertha choach Luhukay chose a similar formation, but on occasion his 4-2-3-1 became a 4-1-4-1 defensively.

The desire for safety showed not only in HSV’s more conservative formation. From the start they also approached the game in a certain way, so as not to get five goals against again. Hamburg aligned in two banks of four. Van der Vaart and Rudnevs did not press Berlin’s central defenders very directly, cutting off the passing channels to the defensive midfielders instead. On the flanks HSV tended to employ man-coverage, especially the fullbacks, who pursued their direct opponents.

With their approach HSV forced Hertha to run the game. It quickly became apparent that the latter, just promoted, have difficulties directing a game. Brooks sent nearly all his passes to Langkamp, who in turn sought the fullbacks relatively often (19 of his 44 passes went to the fullbacks, a further eight to his defensive partner Brooks). After Luhukay introduced Niemeyer for Brooks (23.) and Lustenberger went into defense, Hertha was less dependent on Langkamp during build-up, but only marginally more creative.

Against the man-focused Hamburg side Hertha frequently got caught up in difficult to resolve one-on-one situations on the wing during build-up. Their flexible movements in attack were rarely benefitting them. Ben-Hatira and Allagui ran a lot and switched positions frequently, depending on the situation as well, but the build-up player chose the wrong pass to often. For example, Hertha were never able to exploit Baumjohann and Ben-Hatira overloading a flank. Occasionally Hertha managed to enter the box with crosses from their fullbacks, who came forward with speed, but other than that there was little going on in front of the guest’s goal.

HSV Only Active After Half-Time

Berlin’s attacking attempts were still far more fearsome than anything HSV managed. Their safety-first strategy went hand in hand with an extremely cautious approach going forward. The fullbacks stayed back a lot and the central midfielders did not go forward frequently.

HSV tried to compensate the lack of passing options in front of the ball with long balls. Even if those are looked down upon by football aesthetes, they can be effective – if used properly. Hamburg did not manage. The long balls were not accurate enough to send Rudnevs in behind the defense. At the same time the goalscorer did not manage to hold up balls or deflect them so that his teammates could win the second balls. Hertha won nearly every header and a majority of the second balls after Luhukay introduced Niemeyer. Consequently, the only opportunity by Hamburg resulted from an outrageous pass misplaced by Schulz (9.). 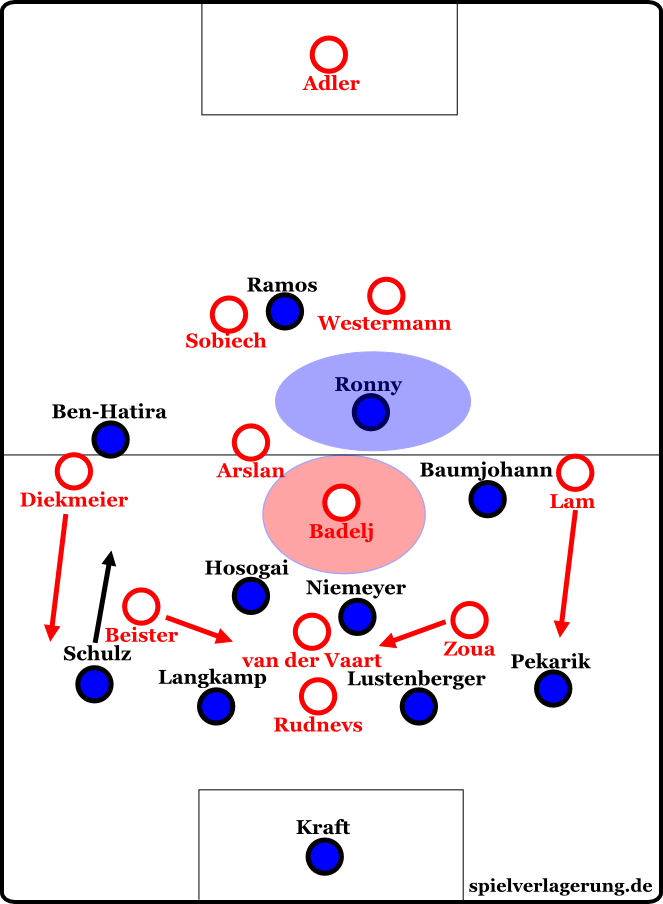 The game after the substituions: Badelj and Ronny have space.

Hamburg only started going forward more ten minutes into the second half. After that point the fullbacks advanced far up the pitch, while the wingers drifted inside. Hertha’s defensive midfielders had to drop back a bit to deal with Zoua and Beister. This enabled Badelj to carry the ball into the opposition half and distribute it there. At the same time Hamburg’s pressing improved – consequential, as they now had lots of players close to the ball to press right after losing possession, especially in the middle. Now it was Hertha, who had to clear with long balls.

Ronny Helps To Turn The Game

As the game threatened to turn in favor of Hamburg, Luhukay reacted and introduced Ronny. This quickly turned out to be a clever substitution: Badelj’s moves forward left holes in Hamburg’s defensive midfield. Ronny ran at space next to Arslan and was free to receive the ball in transition by flat as well as semi-high passes.

The Brazilian got enough time on the ball to open up Hamburg’s defense with fine through-balls. Ramos was lurking up front waiting for those, while Hamburg’s central defenders were caught out. Westermann and Sobiech had to move high up to balance the high position of their team, but they were not always quick enough to keep up with Ramos.

Meanwhile the go-ahead goal did not involve Ronny. It was one of those well-rehearsed Berlin breaks with which they already proved themselves in their first two games. They opened Hamburg’s advanced defense with three passes – especially Schulz’s run dovetailed like a Ronny free-kick into the triangle: 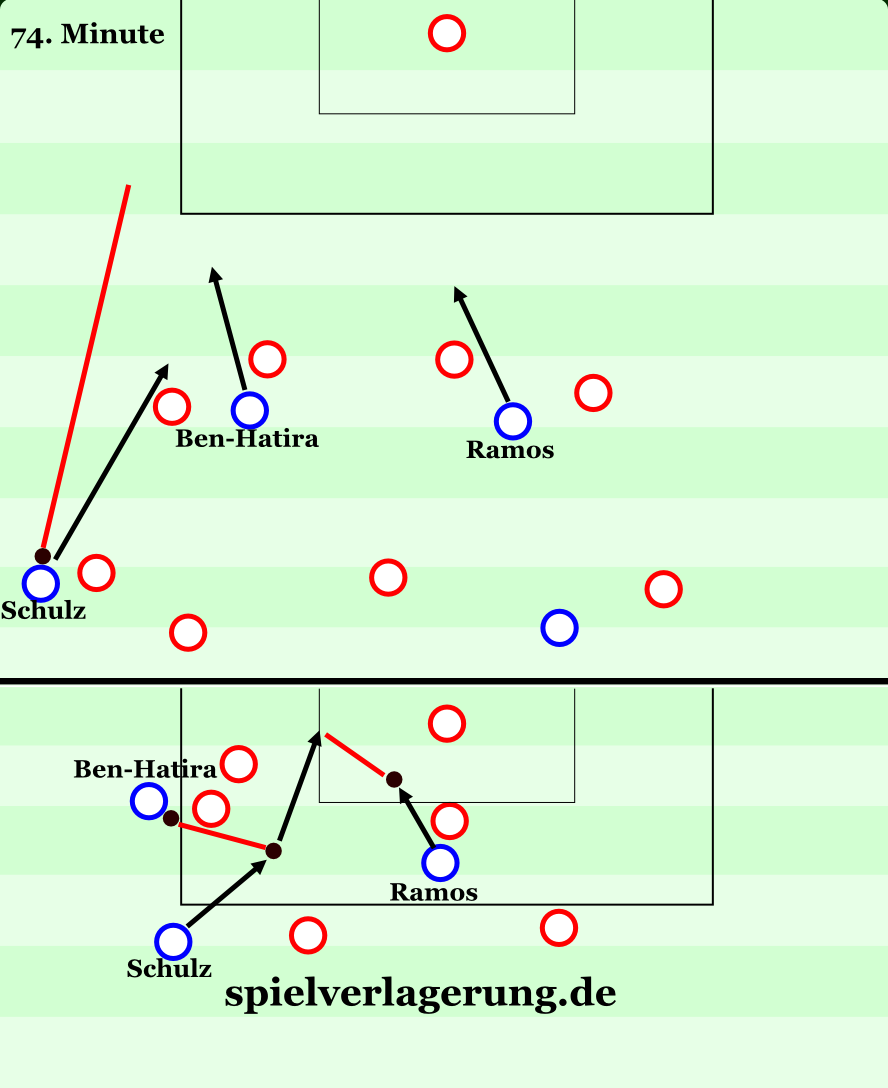 The winning goal: Schulz plays the ball outside, where Ben-Hatira occupies two defenders. Schulz makes an extended run, receives the ball in a pocket of space and services Ramos. Difficult to conclude an attack more effectively while outnumbered.

After this relatively late goal, Fink ordered a total attack. The fullbacks acted like wingers, Zoua and Beister positoned themselves in the middle of the attacking third permanently. Hertha withdrew to their own penalty area quickly, but still got one or two breaks through Ronny. Their tactics at the end of the game was curse and blessing at the same time: they dug in at their own penalty area and on occasion formed a bank of six. They were able to block shots from a distance and crosses well, but allowed HSV space for their own attacks in the middle. Their through-balls only resulted in one genuine opportunity by Beister (79.), but they won lots of corner kicks. Hamburg were unable to convert those though, so the result remained 1:0.

During the first half it was obvious that Hertha BSC were not yet comfortable with the role of play-making team. They had problems to get beyond Hamburg’s well sorted banks of four. Hertha only had scoring opportunities after HSV played for the win and opened up space on the flanks and in attacking midfield. In the end it was yet another good performance though – Hamburg, self-proclaimed Europa League aspirant, had so much respect that they only defended for an entire half after all.

Hamburg continue to be a riddle. Fink abandones his system with numerous positional switches in attack after only match days, only to come up with a 4-2-3-1 which did not seem well-rehearsed at all. The team is lacking balance first and foremost: Either they stay deep and neglect offense – or they stand high up the pitch and neglect defense. Most of all Hamburg lacks coordinated attacks. Hertha showed how it is done with their winning goal – a promoted side mind you.