The opening game between FC Bayern and Borussia Mönchengladbach was a special game for tactic fetishists. After all it is a meeting between Josep Guardiola and Lucien Favre, two proven tacticians, the former showing his first analytical adaptions in the Bundesliga.

Pep Guardiola did not surprise with his starting formation. In a 4-1-4-1 played as a variant of 4-3-3 Bastian Schweinsteiger began in defensive midfield, Kroos and Müller operated in front of him. Otherwise Bayern began the same way they had ended the last seasons against Gladbach. Favre bet on a 4-4-2 and kept the focus on breaks of past games against Bayern, with Raffael up front and Kruse a short way back.

Positional Changes between Half-space and Wing

The most striking feature of Bayern, especially up to the 30th minute, were the movements of the double eight and their slightly asymmetrical runs. On the left Toni Kroos repeatedly went diagonally to the wing, where he and Franck Ribéry had superior numbers, and also opened space for Ribéry in the middle. Occasionally Kroos overlapped Ribéry with an arc-like run, like Alaba frequently does. This allowed Ribéry to drop back and receive the ball during build-up.

These movements played a role in Bayern’s first goal too. Bayern were pressing Ter Stegen, who wanted to free himself with a long ball, which ended up with Schweinsteiger. A pass to Ribéry led to the first goal: Ribéry moved diagonally from his high pressing position into the half-space, while Kroos advanced with a vertical run. Ribèry got the ball to Robben, who was starting a run into the box and scored with a volley worth watching. 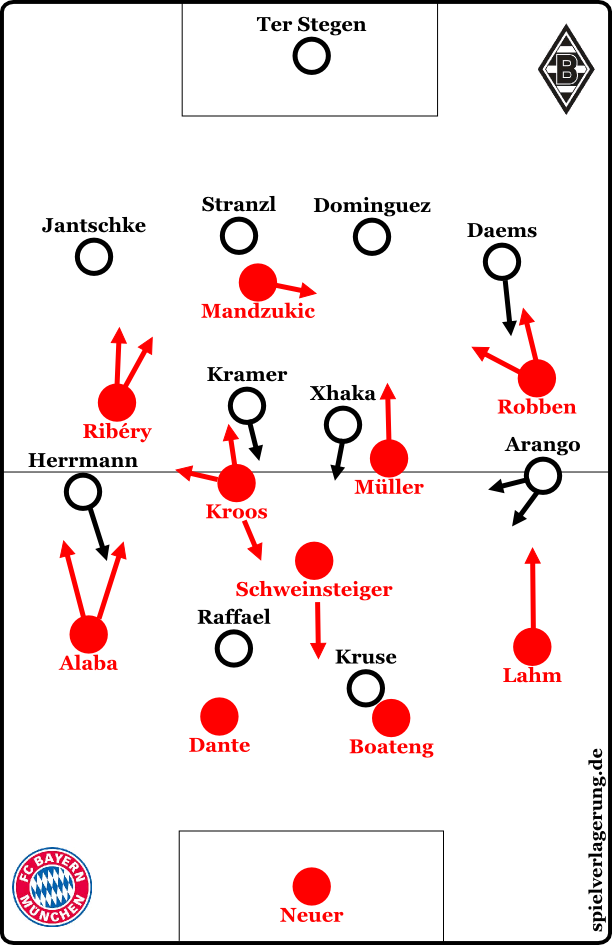 David Alaba made these space-opening runs as well. The young Austrian not only overlapped Ribéry, but started into open space diagonally in front of him and offered himself as a passing option in defensive half-space diagonally behind the wide Ribèry while Kroos was advancing. Bayern were very dynamic on the wing because of these manifold variants and exploited Gladbach’s man-orientation, which had been an added feature to Gladbach’s usual position-based cover during the second half of the last season.

On the right there were fewer positional changes and movements were less extreme. Robben either occupied a wide position close to the touchline or had a free role in the offensive half-space, while Tomas Müller advanced with mostly vertical runs. Mandzukic had a special role, which we will talk about next paragraph.

All in all even loose man-cover could barely be maintained by Gladbach, especially on Bayern’s left flank. Guardiola had created a mechanism that not only impressed with quick circulation of the ball and use of individual quality on the wing, but also with semi-automatic creation of space: Either deep, to play a backwards pass or in attack, so that the wingers could move towards goal or the goal-line.

No false Nine – but a Space Creator and a false Winger

Of course they not only required space in front and behind the (advancing) eights, but also between the lines and while finishing attacks. Enter Mario Mandzukic, whose departure has already been speculated about. Admittedly his starting the game probably had to do with Bayern’s injuries, but the Croatian nonetheless performed and was tactically astute. Defensively he acted as a position filler a number of times, like last season under Heynckes, when he covered for the drifting wingers in transition.

Now this strength of Mandzukic’s was relied upon more frequently in attack as well. Again and again he dropped in between the lines for a short time, moved horizontally along the eighteen-yard-line or moved to the right wing, particularly after half-time. Mandzukic was an option for high balls and a target for set-pieces as well as enabling Müller’s vertical runs and Robben’s free role.

Much has been said about the false nine during pre-season: Robben and Shaqiri have both played as nominal central forward and Claudio Pizarro, Franck Ribéry and the injured Götze are seen as options for this variant. Against Gladbach it was mostly Robben from the wing who was allowed to leave his nominal position and act as “false XY.” Mandzukic was the right choice for this reason, too.

A false nine acting as a deep, play-making nine could have proven counter-productive against Gladbach. Gladbach focuses on position, they do not advance much when chasing and could use high and deep pressing excellently, depending on the situation. A dropping nine would have enabled Gladbach to press higher up the pitch frequently or would have confined Bayern to midfield instead of adding depth.

So Guardiola did well to focus more on the wings, which were partially free of defensive duties. Within the nominal 4-1-4-1 Robben and Ribéry advanced from their wide positions in midfield to slot in between the opposing full and center backs. Then they pressed the fullbacks from behind or gambled when close to the ball, to be immediately available in transition.

Sometimes they formed a 4-1-2-3 or a 4-1-3-2 (with advanced eights) when pressing. Munich’s defensive style was very varied and was carried by the defensively circumspect and physically present Schweinsteiger. Bayern still had a number of problems.

Gladbach Blocks the Center – and Attacks with Speed

That is to say, it is doubtful wether the defending champions really wanted to play the wings in this way. Gladbach seemed to adapt their shifting automatism within their position-based zonal marking: shifts to the wings were less intensive and horizontally compact. If Bayern played a ball to the flanks it seemed as if the wide Gladbach players shifted there disproportionally and were covered less in their man-orientation.

Gladbach tried to block advanced Bayern attacks with quick movements instead. They were aiming to become compact quickly by attacking Ribèry and co. with their double pivot. When Bayern were circulating the ball at back they remained passive and shifted with a collective focus on the center. Mehmet Scholl hinted at something similar during half-time:

So Favre’s goal against Guardiola, who is very intent on control, might have been to close the center. Bayern still managed to play through the middle occasionally with a few quick combinations and passes into the back of defense from high attacking positions, but less often than I (at any rate) was expecting.

Despite their defeat, three goals against and Munich’s attacking play, Gladbach performed well. For a long time they denied short goal kicks with close man-marking and contested second balls. They frequently pursued Schweinsteiger individually, at first with a six pressing high, creating a 4-3-3, later with a center forward in the deeper 4-4-2/4-4-2-0 formation. When Schweinsteiger started to pivot deeply and pursuit was no longer practical, he was left alone. This pressing might have caused even bigger problems for Bayern, but the early goal probably destroyed most of Favre’s plans.

The 2:0, tipped in by Mandzukic, very advanced and probably told to stand in passive offside, probably ruined Favre’s match plan. Gladbach showed some encouraging tendencies and defensively it was not a bad game.

In attack they tried to play the wings and then the half-space with Arango and Daems. With Raffael and Kruse, very agile and filling free roles, they have two tactically highly interesting striker types anyway. Together they are able to accomplish complex tasks in attack and defense. They repeatedly find each other in between the lines, combine together and crate open space in front and drift to the wings.

If Favre is able to exploit this space, maybe even by the “box-to-box”-capable Kramer and Xhaka, Gladbach could be in the contest for the European spots. Regarding tactics and play Gladbach looked solid and stable, even if the result and the course of the game were disappointing in the end. The introductions of Younes (more impulses from deep, more agility and freshness on the wings) and Hrgota (more physically present striker to exploit space) did not change the outcome.

An interesting game with many peculiarities and details. We will see if they are intentional over the course of the coming games. Examples are the long diagonal passes from the center to the wings by Bayern, skipping passing options, the changing cover during attacking plays and Gladbach’s changing pressing intensity.

In the end Bayern were able to celebrate a victory despite minor and major potential instability in defense. Schweinsteiger’s positioning during his forward movements looked risky and exceedingly high, but he was able to block most passes and performed well. Gladbach were never able to play into the holes behind Schweinsteiger. In the end they were unable to generate good opportunities reliably and their pressing was not always effective, circumvented by the duo Schweinsteiger/Kroos with help from Ribéry.

Bayern (also with last match vs Frankfurt) were using too much long balls, which is surprising. Also, while their pressing and possession are good, the movement in midfield is quite slow and not yet up to par. Take Pep’s Barca for example, they also play with 4-1-4-1 formation with a great attention to centre midfield, but the movement and combination there were so quick for opponents to adapt. Pep is trying to be patient, gradually bring things together, or is this what he intentionally keep Bayern differ?