Spurs hosted Internazionale, the perhaps most interesting game of the Europa League round of sixteen. The game involved some well-known players as well as two interesting and talented young coaches. Inter coach Andrea Stramaccioni and Spurs coach André Villas-Boas have both been compared to José Mourinho. Which of the two would justify early plaudits?

The Italians began with a 4-2-3-1 instead of a back three. During the early game they changed between 4-2-3-1 and 4-1-4-1 defensively. After the first Tottenham goal at the latest, the formation became a 4-4-1-1 with the immensely talented Mateo Kovacic shuttling between attack and midfield. Up front he supported Antonio Cassano’s pressing. When Tottenham had played around this pressing line, he would drop deep, sometimes as deep as the midfield.

Inter’s behaviour in defence looked interesting at first. Stramaccioni had ordered his fullbacks to track the opposition wingers high up the pitch. Walter Gargano and Esteban Cambiasso formed a defensively-minded double pivot. The players sprinted out of position frequently, to press quickly, but did not succeed often. 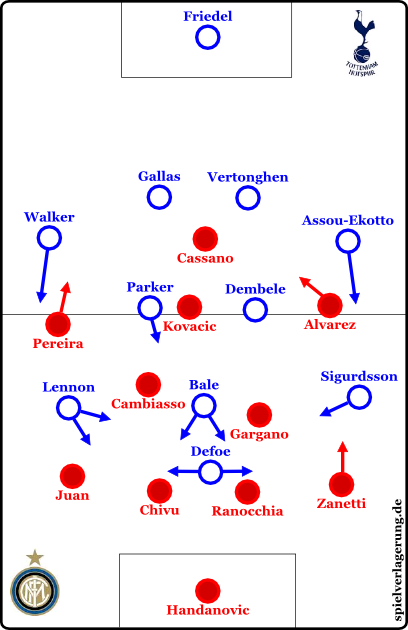 They were staying a little to deep to actually disrupt Tottenham’s build-up. The Londoners could systematically send the ball to strategically favourable positions, though space there was restricted. Inter was somewhat passive though and their sprints, frequent at the beginning, were not combined with the positioning to cover the opened space with an appropriate covering-shadow cone. Tottenham were able to carry play into the gaps opened by sprinting players and managed to keep the ball even against several opposition players a few times.

Tottenham also deserve praise for their quick and mostly precise passing, which combined with the opposition’s passivity. A dominant home team was the consequence. Tottenham’s players also moved in such a way as to cancel out Inter’s tracking.

Especially the well coordinated movements in attack by the home side were convincing. Gareth Bale played as a withdrawn forward, moving vertically and very flexibly. Sometimes he helped build-up as a passing option resistant to pressing, sometimes he was even used to retained possession in restricted areas around the box. Later in the process he used his speed, running from deep and infiltrating space.

His partner in attack, Jermaine Defoe, performed well in this respect. Defoe played in a similarly flexible style, but drifted more and did so horizontally. Time and again he received the ball on the flanks or showed up briefly between the lines to let the ball bounce. His greatest achievement was constantly opening space for his team mates. If Inter followed him, channels opened, if they stayed put, Defoe was open to receive the ball – even if he did not always return it cleanly or finish effectively. Instead his decision-making frequently failed him with the ball at his feet.

These positional games were also present on the flanks and in central midfield. Scott Parker and Moussa Dembele covered for each other well. Sometimes they moved up in interesting ways and at the beginning they even opened space for the dropping Bale. The distribution of roles of horizontal and vertical six during attack could easily be spotted and worked well. Some may be surprised by the fact that it mostly was Dembele, who sat deep, but his intelligence in defence was pleasing. It also was the likely reason he, instead of the more rustic Parker, sat deep.

There was some positional freedom for the wingers too. Aaron Lennon and Gylfi Sigurdsson sometimes switched flanks or drifted infield around the box. There was interplay with the fullbacks, who were strong in attack. They did not move up all the time, but gave width depending on the situation. Tottenham was stable in attack and defensive transition because of the well-coordinated (drifting or switching) wingers and the well-timed forward runs past the wingers by the fullbacks. Inter had few opportunities to attack after winning the ball.

Most Inter attacks started with long balls and passes behind the back of the Tottenham defence. However, not many of these deadly balls were possible, because the team of Villas-Boas moved well when pressing.

The hosts pressed mostly in a 4-4-2, with one of the outside players occasionally moving higher up the pitch. The two forwards cut the centre backs’ passing options into the middle. The wingers then pressed the opposition fullbacks, but did not always stay close, leaving them some room instead. The reason was an interesting move by Villas-Boas.

Tottenham’s midfield was more compact horizontally than the defence. The defenders sometimes man marked when appropriate and opened channels, which could not be exploited because of the tight midfield line. In addition, Inter’s build-up was directed towards the flanks, as mentioned above. Inter’s outside players were able to move up a few meters, but the tight Tottenham midfield isolated them by shifting laterally. Only 24% of Tottenham’s attacks came through the middle. 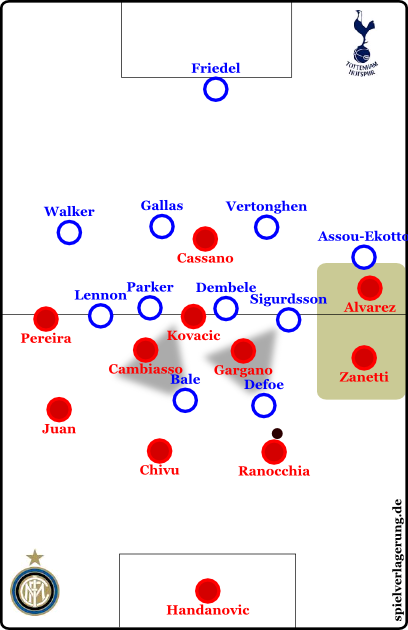 The creative Kovacic barely received any passes while Cassano did not stand a chance against William Gallas and Jan Vertonghen. Lack of a high creative passing option and someone strong in the air to convert crosses made potential overloading on the flanks by Pereira/Jesus or Alverez/Zanetti pointless.

Spurs’ pressing wedges worked very well and were a strong theoretical idea by their manager. At the same time the tactical transformation of individuals under Villas-Boas became visible. The players anticipated much and did so correctly, were able to intercept some dangerous passes and forced opposition passes into calm areas with runs. If possible they also denied the few passing options and so were able to win possession without having to create too much pressure.

Adaptions During the Game

Of course a manager as focused on tactics as Stramaccioni would not fail to adapt during the game. The pressing was always tinkered with. Going from 4-1-4-1 to 4-2-3-1/4-4-1-1 also involved a short spell of 4-3-2-1/4-1-4-1, but without major changes. Inter’s most noticeable changes involved substitutions.

Juan Jesus was taken off at half time. The trained centre back had barely been able to support Joao Pereira in front of him during attacks and was consequently replaced by Rodrigo Palacio. He was supposed to shake up the left flank as a winger, Pereira played the part of a more offensively-minded fullback.

The strategic mode in central midfield changed next. Fredy Guarin replaced Mateo Kovacic and brought more drive, verticality and athleticism to the game. As the game went on, Cambiasso also played higher and more vertically. Guarin supported Cassano in attack and for the final 30 Minutes, Zanetti occupied the wing; Jonathan replaced Álvarez as fullback.

In the end the substitutions did not change the game, nor did they improve the situation much. Spurs sat deeper intentionally, were looking to break and finished the game fairly comfortably. Their substitutions were mostly direct replacements and were meant to add stability in defence.

A tremendous first half by the English, who finished it with ten shots, nine of them on target. Goalkeeper Brad Friedel did not have to act once during the first 45 minutes. After half-time they sat deeper and the weak guests from Milan were more aggressive and brave, but could not pose actual challenges for Tottenham. A Tottenham in this shape certainly belongs among the favourites to win the Europa League. Their manager’s influence is already visible, in contrast to Inter and Stramaccioni, who appeared lethargic and slow at times.