Hoffenheim versus Bayern – not as one-sided as could have been expected.

Hoffenheim did their job well. Defensively they were playing 4-4-1-1, with Igor de Camargo assigned to Dante. Hoffenheim wanted to put Dante under strong pressure as quickly as possible. Kevin Volland, the second striker, played behind and to the left of de Camargo because of that. Often he would move forward quickly to attack Boateng or to deny passing options. In response, Bastian Schweinsteiger fell back frequently to help in the build-up. 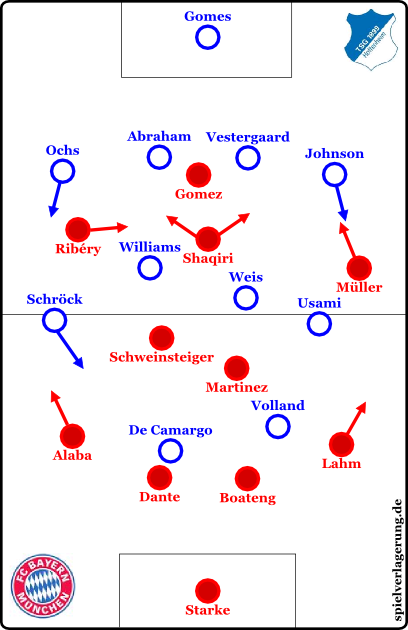 formations in the beginning

The most interesting aspects of Hoffenheim’s defensive play were their two different pressing heights, the change from one to another and man marking depending on the situation. From time to time Hoffenheim used a high midfield pressing, aiming to put early pressure on Bayern. If Hoffenheim’s formation was well organized, Bayern had to pass the ball around the first third of the pitch. Bayern frequently used their full backs and quick passing involving the wingers to go forward, which triggered Hoffenheim’s second pressing formation.

The second pressing formation was centred around their own box. Between the high midfield and the space before the box, there was no structured pressing. The midfield simply tried to get back as quickly as possible and to array itself in front of the defensive line. This caused an interesting interplay: Bayern needed a lot of time to get from the wings back to the centre.

Bayern’s usual focus on stability and safety made passing options up front scarce. Hoffenheim could form two chains of four and made space tight. There was no room between the lines to play in and occasionally there were 10 meters and less between the two lines.

The loose man marking was used mostly during high pressing. The players on the wings were attacked and in midfield Tobias Weis moved forward, mostly when Schweinsteiger fell back. In combination with the formation Hoffenheim was very compact and stable before Bayern’s goal. They allowed few chances and thanks to their quick wingers, Volland and de Camargo they also had a few dangerous counter attacks.

Bayern on the other hand seemed to lack ideas. There were a lot of long balls from deep, many crosses and Franck Ribery had a free role. After the first minutes, the Frenchman rarely was found on the left wing, moving across the whole breadth of the pitch instead. Sometimes he even came back to support in defensive midfield.

Also interesting was the role of Mario Gomez. In contrast to his rival Mario Mandzukic, he did not move to the flanks, instead kept staying in the middle and trying to give depth instead. The crosses and long balls probably were aimed at him and his strengths. Not a bad idea in theory, but a different Gomes had not been accounted for.

The Hoffenheim keeper controlled his box in impressive fashion, made surprisingly strong sorties and looked good intercepting crosses. Bayern’s passes from deep and their crosses would have been more dangerous if he had played differently. This way Hoffenheim looked stable despite losing the possession battle and could put pressure on the flanks a few times, causing Müller et al to look very imprecise at times.

Bayern’s pressing was seldom successful on the other hand. Rarely could an intense quick pressing be seen, the transition in defense was weaker than usual and for some time there was no solution to Hoffenheim’s six dropping in between the centre backs to facilitate play. Bayern usually press in a 4-4-1-1 in which Toni Kroos moves up to Mandzukic’s height.

With Gomez and Shaqiri they did have a new pair playing these positions. Lacking impact, they almost formed a 4-5-1 instead of the 4-4-2 roles. Shaquiri rarely advanced to help. Later this was fixed and Gomez tried to direct the passing options of the central man to one side, where Shaqiri could single him out.

The character of play

All in all it was a nice game. The game went back and forth a lot, because of Hoffenheim’s way of playing there were very little midfield skirmishes and Bayern looked less stable compared to the last few weeks. Reasons were the weaker counterpressing as well as the weaker space distribution and the transition speed. Hoffenheim was allowed to be dangerous at times, but were rarely able to finish these attacks effectively. 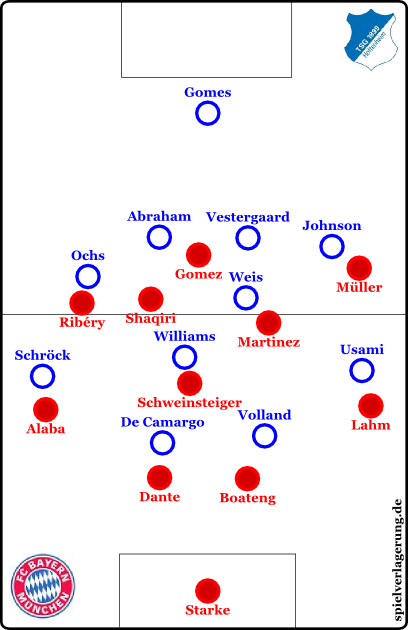 During the second half, supported by their lead, Bayern played as usual: stable, safe and with quick attacks. They profited from the change to Luiz Gustavo and from their lead. There were fewer long balls, instead they worked the flanks more flexibly and could let Hoffenheim sit deep without getting in danger.

One could almost see a spinning top on the sides. Lahm and Alaba played more diagonally, Ribery and Müller were looking for the line more often and in the centre Schweinsteiger and Martinez covered from far up the pitch. After Gustavo’s introduction Schweinsteiger was the option behind Gomez and later behind the joker Mandzukic. Strong in defence and resistant to pressing he gave Bayern additional stability and Hoffenheim’s counter attacks seldom got far.

Hoffenheim should be praised anyway. They played aggressively, had a plan and looked enormously motivated. At times they tackled too hard and looked too aggressive, but that too is par for the course, especially against a team like Bayern. With their aggressive stance they were able to deny some attacks and showed an intense game.

Nonetheless, one has to question the effects of this motivation on the game, which showed in 24 fouls. The substitutions barely changed anything on the other hand. Neither Roberto Firmino, nor Joselu, nor Derdiyok added much to the game, except a clear formation change to 4-4-2. The high pressing of the first half was used less frequently, of course also an effect of Bayern’s changes.

All in all it was an acceptable performance against tired Bavarians lacking in concentration. The Bavarians however proved once again how mercilessly effective they are, narrowly missing two more goals by Schweinsteiger after free kicks. Towards the end they created more chances, making the win a deserved one.

Though it is ironic that the goal was scored during the first half and its tepid Bayern play. A missed pass, weak transition game by Bayern and a successful interception high up the pitch by Boateng followed by a great pass resulted in their lead.

Not a great game by either side, but underdog Hoffenheim showed a good game during the first half and were partially able to break down the stable Bayern defence. The record champions could relax after Gomez’s goal and play their game – with a lot of stability and a convincing showing during the final minutes.

Written by RM, translated by Fabian I. – special thanks to him, his work and the wonderful free translation!

Well spotted. It’s one of the things I’ll pay attention to going forward. 🙂

Good work, the translation feels better compared to the first english article (Bayern v BVB). It is more readable without loosing its orginal meaning. I have got just one small remark about the expression “two chains of four” which I have not heard before. I’m used to “two banks of four” by english commentators/pundits.

I suggest that everybody just comments in English on English articles. Might feel a bit akward, but German comments may make English-only readers less likely to comment themselves.

Great work,so much better than Zonal Markings website.This is much more detailed and sophisticated.As a Englishman who doesn’t understand a word of German these translations are much appreciated!

Thanks for the effort of translating! No nagging this time, it’s a good read. I even learned some new vocabulary 🙂