Much was debated before the match: How would Bayern handle Andrea Pirlo? Basic formations at the beginning of the game

Would we see Pirlo vs. Kroos again? The answer to the latter question was a clear and simple yes. Kroos marked Pirlo and followed him while Mandzukic acted solo in front of him. Pirlo hardly ever got into the game and Juventus had a hard time in the centre.

Mandzukic’s pressing was extremely deep and for a long time passive, until he became enormously dynamic and aggressive. Because of their low position Juventus’ back three had a lot of time and space, but Bayern had ten field players behind the ball, the Italians only seven. At the same time the half-backs were repeatedly attacked by the Bavarian wingers and therefore could not push out.

Mandzukic focused on directing the attacks to Barzagli and then mostly stayed with Bonucci when assisted by Ribéry in pressing. Thus, Bayern’s 4-2-3-1 pressing was not a variation of a 4-4-2, but rather a 4-3-3. They controlled  Juventus’ build-up game better with this approach. Because of Mandzukic’s brief passivity they could always move into excellent positions. This passive attack pressing was one of the game-changing factors.

In addition, this was the main tactical reason for featuring Mandzukic in the line-up. While Gomez may be better in backward pressing, and Pizarro the technically best footballer, Mandzukic was ideal for this game. He ran at all three central defenders, and his movement was tactically outstanding. Manzukic facilitated the fluidity of Bayern’s offensive. Ribery played again and again as a situational centre forward while Mandzukic covered for him. There were some scenes like this with Robben as well.

After Kroos’ injury Müller took over the position behind the offensive three and played the same role as a man-marker on Pirlo, although he was somewhat less accurate. But Pirlo was not the only one who was marked. On the whole field there were different types of man marking to observe.

Juventus could therefore hardly disengage themselves from the pressing. Munich’s wingers put the wing defenders into covering shadow and pressed on the half-backs or sometimes even in the middle. Pirlo was removed from the game and the Eights’ vertical sprints were neutralized by collective retreats and situational man-markings by Gustavo and Schweinsteiger.

Juventus’ retreating centre forwards were taken totally out of the game by the Bavarian centre backs’ forward movement and man-marking. This was so extreme that van Buyten and Dante did not only harass Quagliarella and Matri, but they even reached the ball before the Italians could do so. It was risky play, but executed on a very high level. Moreover, this way of playing caused additional problems for Juve.

We already mentioned in the team portrait of Juventus that Juventus depends much on long balls which may be processed either directly or recaptured in counter pressing. In today’s game they had incredibly big problems with this strategy. 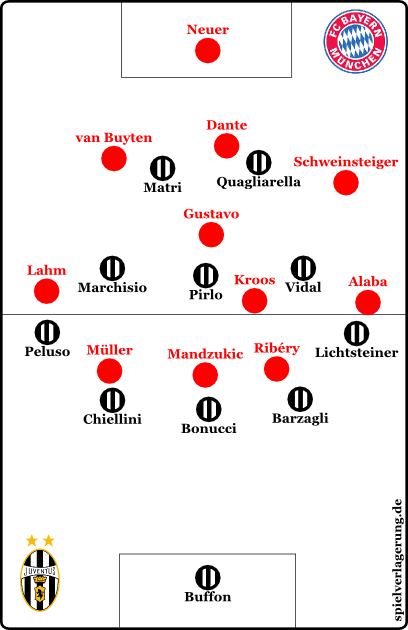 On one hand, they could almost never deliver these long balls. With van Buyten and Dante (and their man marking), Bayern had absolute air superiority in the final third of the pitch. Through balls into space were all collected by the imposing Neuer. And because Vidal and Co. could not move up in time due to Bayern’s high pressure, the positioning so important in counter pressing was less than optimal.

The counter pressing duel announced in our preview was won by Bayern.

Juventus’ long balls were no danger but rather a wasted ball and a Bavarian opportunity for counter attacks. In addition to this, Juventus had another problem.

It is difficult to say how Juventus may have originally intended to press. They received a goal very early in the game and thus had to move up higher, briefly employing attack pressing. They used a 5-3-2/3-5-2, sometimes it was a flat five. This raised two interesting issues.

Number one: they wanted to direct Munich’s build-up play to the side, but they were clearly inferior there. Number Two: they employed a flat three, resulting in an elevated position for Pirlo. Juventus thus wanted to increase pressure and to position Vidal and Marchisio slightly wider, which was supposed to reinforce the wings.

This kind of pressing was just briefly employed. This phase lasted for about twenty minutes, then it ceased to exist. The reason for this was Schweinsteiger’s tilting. Again and again he moved to the left, pushed Alaba forward and created a bank of three in the back.

The Juventus’ pressing with two forwards was thus ineffective, and Bayern supercharged the wings. Gustavo secured the centre, while Schweinsteiger often pushed out.

Bayern on the offensive

Schweinsteiger was in fact the playmaker in this game. Yet this is not only true with regard to Bayern’s game, but also to the opponent’s – his movement in pressing, his movement forward and his support of the strikers’ pressing moves were great. Together with Mandzukic he deserves to be named man of the match.

The Croatian striker gave a tactically brilliant and combative performance. He always filled gaps in the offensive, collected long balls and opened space. In the first half, he situationally left his place as a centre forward for Ribéry. In the second half, Robben and Müller increasingly moved to the top. Mandzukic made that Bayern’s overload and fluidity were enormously dangerous.

The fluidity was probably decisive. Juventus had huge problems because Mandzukic repeatedly crossed the wingers who fell back. 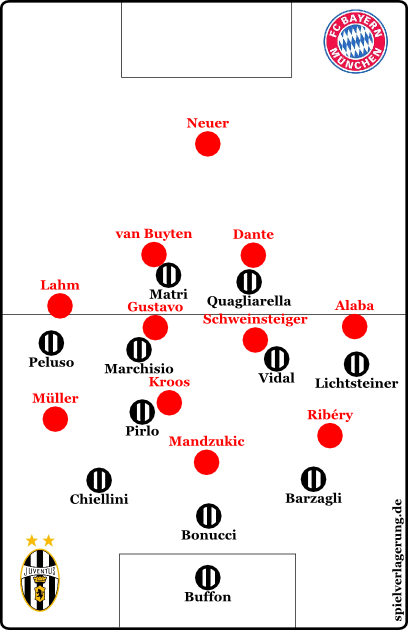 In one scene, for example, Chiellini pursued Robben far back while Peluso was on a line with the two defenders as Lahm had pushed out high.

Mandzukic simply sprinted into this space, prevented the remaining defense from closing in, played a trough ball and opened space for Lahm on the side. In addition, Bayern played with situationally diagonal fullbacks. Therefore, the wingers remained slightly wider and opened gateways. This did not create extreme danger, but at least chaos in Juventus’ play, as they were not always able to take care of their responsibilities.

Antonio Conte thus substituted not only the centre forwards, but also changed the formation. With Paul Pogba, Juventus played in a slightly asymmetric 4-4-2 in which Vidal and Marchisio played as wingers. Its purpose was to create more defensive stability on the wings. Chiellini as left fullback moved forward and relieved the weak Peluso.

At the same time they now employed two more mobile strikers, Giovinco and Vucinic. Conte’s intention was clear and correct. Pirlo had been under pressure for the entire game and in search for space. He almost seemed to move away from the ball to create space for others and to asymmetrically counter Bayern’s pressing.

But the wings still barely came into play, and the centre was tight. In the second half, Bayern focused more on zonal marking because of Juventus’ more mobile forwards. The 4-4-2 ultimately brought no relief for the Italians. Pirlo was still out of the game, Pogba could not take over his role, and Schweinsteiger’s excellent forward movement counteracted this change completely. 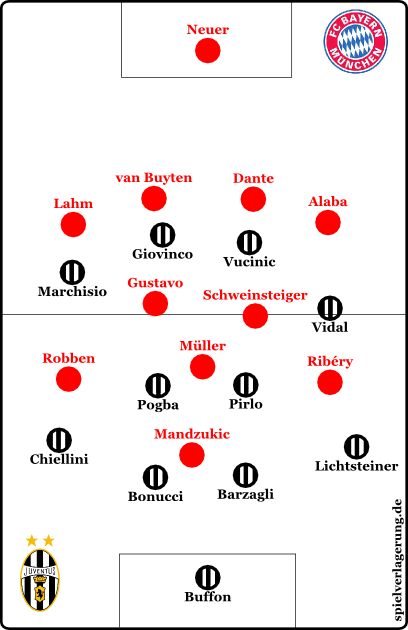 Basic formations towards the end

In addition to that, the creative hole in Torino’s midfield could not be filled – instead Schweinsteiger and Gustavo collected any rebounds. Along with the excellent defensive work of the Bavarian wingers and of course Mandzukic this led to the fact that the changes implemented by Juventus did not produce any profound improvements in the game balance.

Bayern adapted outstandingly to the opponent and gave a great performance, playing-wise and tactically. Juventus never found a way out of the Bavarian pressing, had huge problems to come into play and ultimately was not even punished enough with this 0-2 defeat. In the second half, Bayern was simply brutally effective in regard to the defensive play.

Juventus, however, had some defensive problems. In our five-question list I wrote:

“Will the wing defenders move far forward in pressing, close to the opposing full-backs? Or will they remain deeper to help the centre-backs against the wingers? In this case, they need to focus on the right moment to pass and their forward movement. This could be enormously dangerous. “

This was Juventus’ recurring shortcoming and responsible for Munich’s superiority. The 4-4-2 was supposed to fix this, but it failed.

Written by RM, translated by PF. Special thanks to him!

Lahm and Alaba were good as always, going up to occupy the spaces, stretching Juventus’s defence, supporting the midfield while our wingers attack their flank. However, Lahm was facing Peluso, and unimpressive left-back, and Alaba, beside scoring his goal and several bombing up, was pinned back and allow Lichteiner too much chance at the last quarter of the match. Conte surely recognized his mistake, and probably make some adjustments for the return.

I would love to hear your spielverlagerung.de opinion on the return leg. I’m even more excited than the first one. Should Bayern field 2 defensive midfielders in Martinez and Gustavo, with Schweinsteiger ahead, trying to protect the 2-0 lead, or would they line up with Schweinsteiger – Martinez with Muller ahead, Robben on the right, a very direct line-up, trying to search for an away goal, risking some space behind? And how will Juve fare this match, knowing their mistakes last week?

Great article. How do you assess Lahm and Alaba performance, and their impact to the game?

Just to be nit-picking: wing defenders are called wing backs.

Great article. Just two small things. The Juventus logo is way outdated and never refer to Juventus as “Torino”. Juventus is Juventus and Torino is the other club from the city. Just like Lazio is Lazio and Roma is (AS) Roma, just like Inter(-nazionale) is Inter and Milan is AC Milan.