Bayern deliver a premature masterpiece as they have to wait a bit longer for the Schale.

Thorsten Fink and his team did have an interesting plan too stop the bayvarian machine. In pressing, they played a 4-1-3-2 in which Milan Bedelj orientated to the front, behind the two strikers. Those two, Rafael van der Vaart and Artjoms Rudnevs dealed with Bayern’s centrebacks. 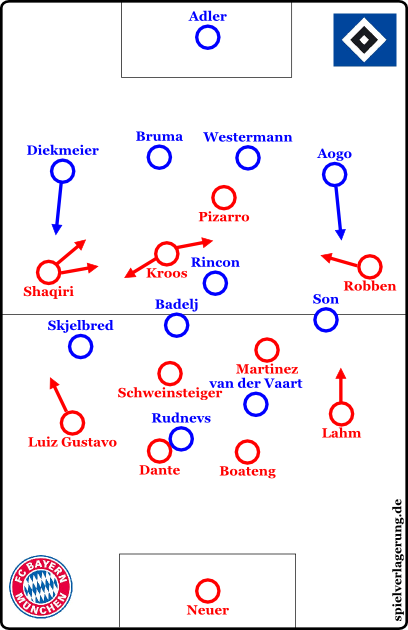 This way, Hamburg tried to interrupt Bayern’s build up play. There were many (loose) man marking situations, Badelj, for example, followed Schweinsteiger in his tilting moves. In midfield they used a three man chain behind the two strikers to create high offensive compactness. The width of the pitch was filled, Badelj covered (as written above) in front of Rincon the offensive middle and the two strikers were to pressure the bavarian centrebacks. Their goals obviously were to interrupt Bayern’s build up and enormous pressure.

But the pressure could only be turned up indirectly. On the one hand, there realy only was high pressure on Neuer, who was able to handle the ball without problems, in certain situations. When pressed, Bayern therefore deliberately passed the ball to Neuer, who then didn’t have any open passinglanes but could at least get out long balls to open spaces.

In the first five minutes, Bayern were hardly ever able to play their way out of their half, but started to deal with Hamburg’s pressure better and better. This was possible because of another factor: Bayern not only passed very accurately, but also with very short contact times. Hamburg never came to grip and despite their man marking hardly ever got into encounters.

The seemingly high pressure from Hamburg was turned into a self killer. The loose man marking opened spaces to their respective opposite numbers. The relatively high pressing in a 4-1-3-2 and therefore many attacking players further emphasized this. Thanks to their quick combinations into attack, Bayern got into the half spaces next to the lone defensive midfielder and because of their short contact times and harmonious movement, the impression of a “passive HSV, who doesn’t want to encounter Bayern in close quarters” was created.

Another problem with Bayern’s movement was the interdependency with Hamburg’s formation. Hamburg actually played with Skjelbred coming into the middle, van der Vaart tracking back and Son positioned high. However, Bayern managed to slightly change the offensive arrangement and create a fitting opposing formation, thanks to Bayern’s personnel. 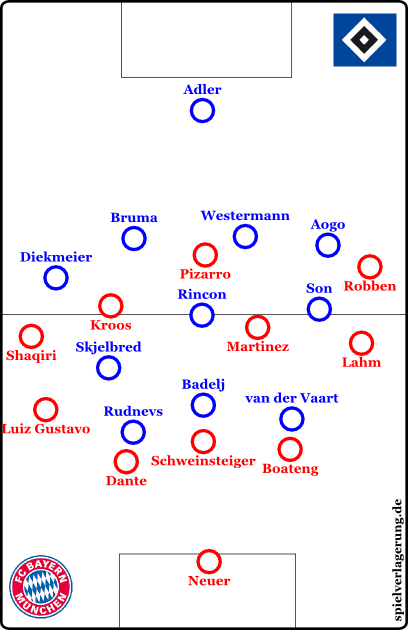 Hamburg pressing. Because Bayern are always able to incorporate Neuer, Hamburg gets into trouble. Adding to the problems: Bayern’s technical abilities and their interesting movement

The record champion played with Luiz Gustavo at left back, behind Xherdan Shaqiri. In build up, Shaqiri and Kroos took turns to drop in front of Gustavo, a movement similar to “tilting”, but used higher up the pitch. At the same time, Schweinsteiger moved in front of the centerbacks and sometimes between them, while Lahm positioned himself extremely high.

This asymetry, with highly positioned Lahm, Robben being good in one-on-ones and the numerical advantage on the left with Kroos, Shaqiri and Gustavo changed the pressing formation of Hamburg. Son had to drop deeper because of Lahm, Skjelbred was outnumbered and couldn’t decide wether to cover the opposing left wing or the free player in the half space.

This free player couldn’t be decently covered by Rincon, because Martinez charged forwards often – while Badelj followed Schweinsteiger but was sooner or later forced to let him go into space, and all of a sudden was in a vaccuum. Additionally, Bayern played clever balls from on side to the other in all three thirds across the whole game, denying Hamburg any form of grip.

Bayern were therefore always able to either play into the half space or the distant side or overload on the wings, which resulted in a high number of crosses.

Those crosses are normaly seen critically here on Spielverlagerung, especially when played in such vast numbers. In this game, Bayern showed the advantages they present when used the right way. An important factor was the accuracy of several crosses, and the closeness from which they were played. Often, they came from the egdes of the box, hard into the middle. This way, not only was Adler neutralized, but also Pizarro utilized perfectly.

Furthermore, Bayern convinced with great switch play to defense. Against Hamburg, they were outstanding in this area for the first time in recent weeks. Following unsuccessful crosses, they quickly formed a compact array and choked Hamburg’s attacks. They won back many balls, then were able to use their opponents aborted moves up the field to create new attacking situations against a disorganized team.

This way, Bayern looked extremely solid defensively. Another factor was of course both teams reaction to Bayern’s lead. Hamburg, naturally, was a bit unsettled – what to do, when you can’t get into tacklings, can’t do anything about it and your formation is impalpably distorted? Bayern on the other hand were able to play their game and position themself a bit deeper in pressing, which didn’t work that well in the beginning.

They played a position orientated 4-4-1-1, in which Kroos sometimes changed the formation to a five man midfield or into a 4-4-2. Thanks to this compact and position orientated style of play they destroyed Hamburg’s offensive play without great expense. Hamburg either played to their isolated wings or held onto the ball in the first third of the pitch. Some good passes by Badelj were the only technical highlights, allowing Bayern to man mark in certain situations in defense or utilize their conventional pressing.

The game winning factor on offense for Bayern was their flexibility and fluidity. Arjen Robben turned up on the left or in the middle, despite hanging on to his nominal position, far out on the right often. Shaqiri and Kroos were even more mobile. Kroos sometimes dropped deep centrally, moved out into the half space or built up play from the left. 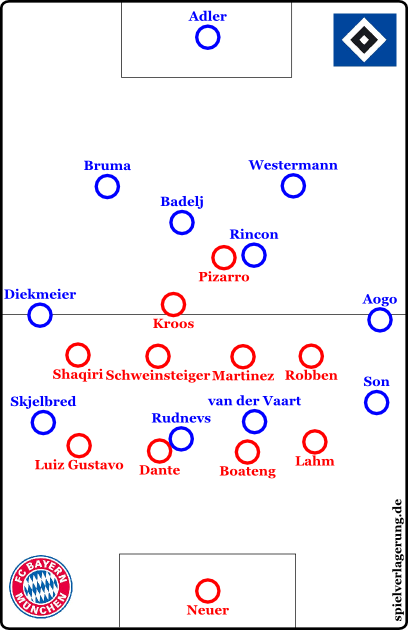 Bayern in a 4-4-1-1 for a short time. Hamburg’s wingers may play as high as they like: Bayern isolate them from each other. Long balls to Rudnevs are won by Dante and others without problems, furthermore, thanks to their compactness, Bayern dominate second balls.

In this case, he took turns with Shaqiri, as noted in the first paragraph, which created interesting dynamics. Key player was nevertheless Claudio Pizarro. Even four goals and two assists don’t give his performance enough credit. About four times, he filled the hole in the middle left open by Martinez charging up and Schweinsteiger dropping back – you got it right, Claudio Pizarro, centre forward, dropped into the “six” and did very well there.

In switching to offensive play he was outstanding too. Sometimes, he quickly tracked back to play amazing passes amongst others a genious seam pass to Robben which lead to a corner from which they scored. Apart from that he moved to the wings or into the half space often, offered himself to passes or supported his teammates. In pressing too he didn’t disappoint and therefore showed one of the best  overall performances of a striker in the history of the Bundesliga, from a tactical standpoint too.

A strong showing by Bayern, whose victory may be a bit too high, but earned. No comment on Hamburg though. They showed promising approaches, but psychologically, they fell apart early on.

Special thanks to Korbinian H., who translated this analysis for us and our English readers!

At least half of the verbs used in this blog post do either not exist or they are barely used. While I highly appreciate the effort of translating this post into English – like many others, I suppose – please let me tell you, that the language is so far off that it is bordering the ridiculous (which is a pity).

People who read the blog post need to understand, that the soccer knowledge and the analysis on this website are superb and much better than the quality of the translation.

the english translation is pretty bad if it’s done by a professional translator like you said, especially the sentence construction is amateurish

Thanks a lot for the article, and the effort to translate it into English. Much appreciated and admired!

could you be so kind to publish an article about the defense-strategies of corners? I wonder, which tactic is actually the best to pretend goals after corners. Defend the space or the man? Defenders next to the Poste?