1v2 practices and a theory for implicit pressing practice design.

In this article I will discuss three practices I recently delivered, how they work, how coaches can incorporate elements of them into their own sessions, and a theory of designing practices to implicitly encourage high pressing. 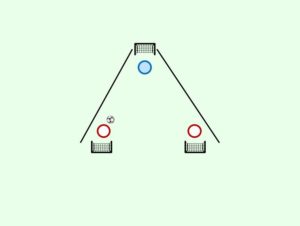 The first practice outlined in this piece is a simple 1v2 practice. The practice starts with a red player in possession of the ball, the red then passes to blue and the practice begins. The blue player in the diagram is tasked with scoring in either of the two goals, that the reds are stationed by, the reds are encouraged to press the ball, with the pitch shape constrained to make their pressing runs always diagonal towards the goal. If the reds win the ball, they must score in the blue goal. A progression here could be that after pressing and winning the ball, the reds must combine before they can score. If the ball goes outside the pitch area, play restarts from the red player serving the ball in.

I like this practice a lot for varying outcomes for both the blue and red players. The blue player is tasked with dribbling two defenders in a underloaded situation, I don’t often see many practices where a coach underloads the attacking team, forcing the player to dribble more. Often when designing practices, coaches are too caught up in overloading the attacking team, to create successful goal scoring actions. With the pitch design it is imperative the blue player takes a good first touch, and a good first football action to evade the pressure of the two players diagonally pressing them, two of the most successful options in this scenario are a nudge forward into space centrally between the two pressing players, if the defenders decide to position themselves slightly wide (goal-oriented), or a small touch outside of their body if the defender moves towards them centrally, allowing a situation where they will often pass the onrushing defender, with the second one behind them. It is down to the blue player to decide which action is most successful reacting to the stimulus of the press of the two defenders.

Whereas for the defenders, the main focus is on how they press the ball, obviously the pitch shape design gives them a rough guide to move diagonally towards the goal, and ball carrier, but they still have lots of things to consider when pressing, how wide/narrow do they run (goals are on the outside edges of the pitch), which height do they press at, do they press together, or cover, how fast do they approach the ball, and how do they use their cover-shadow when approaching the ball. When listed, although the players have an implicit focus on which kind of pressing run to make, it is clear there are still many decisions they must make in this practice.

The idea of having them at differing heights in pressing is very important for coaches to consider when looking to see an outcome of combinations after ball recovery, if the players are too far apart when the ball is won, there is no chance for combination, leading to a probable 1v1 situation, which would come down to individual superiority, not the creation of 2v1 numerical superiority.

Prior to this practice I used the same pitch shape to play a 1v1v1 where each player had to defend their own goal, in a king of the ring situation, with the coach acting as server playing in constant balls every time play stopped. This allowed the coach to create situations in the practice, i.e playing a slide pass in behind a player who was away from their goal to create a recovery situation. This practice is very useful for younger children, to create 1v2 dribbling situations, with the coach constantly feeding in balls the tempo and intensity of the practice was very high, with a high rate of football actions being produced, whilst giving the players freedom, the coach also has an element of control to manufacture certain situations.

As a second idea for the reader, here is another 1v2 practice. I tend to start the practice off with a ball played in from either the coach, or a resting player. Game begins with a ball being played into the red player, who must try and score in either goal. Whites are tasked with pressing red, (coach can allow them to move at different times, when the pass is first played, on the players first touch, etc.) and winning the ball back, after the ball is won, they must combine to score a goal. By giving the task of having to combine before scoring, the coach is implicitly making the white players consider the distances between them in pressing, to create numerical superiority after the ball is won.

I like the 1v2 situations this practice creates, because the receiving player has the option to receive the ball into their body, forcing them to shield against pressing players from either side, or they must take a touch towards one of the goals. This then creates a situation where the player is being pressed on both sides horizontally, or they are being pressed from the front and back. This is quite a difficult situation for the ball carrier to escape from, but I think it is a fantastic exercise to train 1v2 dribbling, pressing and counter pressing, as possession turnovers are likely to occur in the small space.

In an ideal world, in the above practice the two red players would both press high to win the ball, this is in the design of the practice. Now players don’t tend to always follow the explicit instructions of the coach, who has asked them to press after the pass to the blue player. If the red players decide to be mini risk-adverse Mourinho’s and man-mark their goals, how can the practice really work? Because the outcome is for the blue to dribble 1v2, which won’t happen if both players man-mark their goals, and for the red to press high, which won’t happen as they won’t want to concede.

A way around this, is simply the addition of a third goal in the middle of the pitch, by giving the defending team more goals than they can man mark, they now must be aggressive in their defending to be successful, instantly creating a high-pressure situation, without explicit coaching.

Put simply, when designing practices with an implicit focus on high pressing, try to give more goals, than there are defending players, (in smaller games) or create spaces that are unreasonable for players to defend/cover, thus a need to be aggressive with their defending. 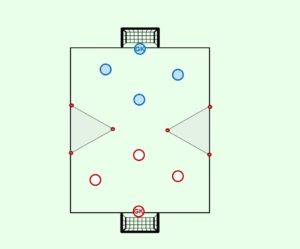 The third practice I wanted to discuss can be seen above, a simple 4v4 game with two triangles marked out with flat markers, or cones. Players cannot dribble through the shaded areas, but they may play passes through them, no player is allowed inside the triangle area, if the ball is dribbled into the area, a throw-in, pass-on or dribble-on will be given to the opposition team. (To help younger players visualise the pitch space it may be worthwhile to simply cut the triangles out of a rectangular pitch to create a hourglass shape, rather than flat mark them.)

I used this practice a while ago, where players were not able to pass through the shaded triangles, and while useful for creating central dribbling situations and combinations, it became far too easy for the defending team, as they simply defend the centre in a 2-1 shape, covering the whole length of the available pitch space.

I think the changes to allow passes through the triangle worked, players had lots of decisions to make due to the constraints of the pitch shape. We had, underloaded dribbling situations in the centre, central combinations at varying angles and heights due to the pitch shape, third man movements.

One aspect I really liked in this practice was the diagonal movements of the highest player in the attacking team to receive the ball through the triangle, diagonal movements are often the most effective action in football as they take the player towards the goal and often out of the defending players eyeline. It also creates an instant decisional crisis for the defender whether to follow the attacking movement or stay in position.

A progression I did make to this practice was a touch restriction to encourage quicker combinations and layoff’s, as the pitch is split, the coach could add a touch limit in either half or across the full pitch, depending if they want a quicker build-up, or a quicker action in final third. I did also add in a second goal for each team, moving both goals into wider positions, and encouraged both teams to alternate between a 1-2 and a 2-1 shape when defending the goals and central zone.

Just to leave you with a final thought to take away regarding constraining pitch shapes, please see the session below (brought to my attention by SV writer ES) from Markus Gisdol. In the practice, the coach has clearly outlined a diamond in the middle of the pitch, that players cannot play through. Obviously, this is to train wide combinations from a deeper starting position, whilst probably fine to utilise this when training a pro-team to fit inside the coaches’ game model (I still have doubts), would it really be effective to train this with a grassroots team, who train once a week for an hour?

How can you constrain pitch shapes and sizes, but keep your practice effective?

Why is it important for the red defenders to press diagonally? Thanks.

“A way around this, is simply the addition of a third goal in the middle of the pitch, by giving the defending team more goals than they can man mark”

Why would anyone wish to encourage, implicitly or explicitly, an ineffective strategy like high pressing?

Why do you think that high pressing ist an ineffective strategy? What makes it fundamentally inferior to defending in a lower block?

So you say: “defend only your own box”?
There are plenty of goals scored from outside that area. Especially when the shooter is not under pressure and has time to make his shot.
In addition you now have to move at least 60 m (from around your own box to around the opponents box) up the field to score after winning the ball. You can win the ball right there and try to score when pressing high – so why not to it (at least sometimes)?

“There are plenty of goals scored from outside that area.”

Hi there, what kind of dimensions do you use – especially for the triangle set up please? Thanks in advance