In the SV Mailbag, we answer questions from our followers. For this edition, George Jones answers your questions relating to coaching and training.

How can I provoke offensive 1 on 1’s in a small sided game?

To put simply, it all comes down to practice design. Is the pitch designed in a way to promote 1v1 situations? A simple way to overcome problem of not having enough 1v1 situations would be to constrain the practice and say that a player must beat a player 1v1 for the team to be able to score.

You can play with this is many differing ways to achieve an outcome, only one player has to win an offensive 1v1 to be able to score, 2/3 players have to win a 1v1 before the team can score, a player has to beat a certain player on the other team 1v1 for the team to score, lots of ways the coach can manipulate this to create 1v1 situations explicitly.

Another quick way to do this, especially for young players would be to remove goals, and replace them with “end-lines” that players must dribble over to score a goal, this will then increase dribbling opportunities.

Any ideas on how to train the drawing of the opponent to then finish on the far side?

A pitch with three channels, two goals for each team, one in either wide channel. One point for scoring a goal with 3 or more attacking players in a channel, two points If you can switch to the underloaded far channel and score. This way you are creating an overload on one side for a quick switch to an underloaded side.

It may be worth constraining the game even further by making it an 8v8 game for example, the scoring rules from above still apply but both teams must have 7 players in two of the channels and one player in the third channel, or 5 players in the central channel only etc etc, these are just ideas for you to play with to create a situation that works for you and your players. I am not so much a fan of constraining the game this much with this specific topic as it is heavily manufactured, but it will work for you as a starting point. 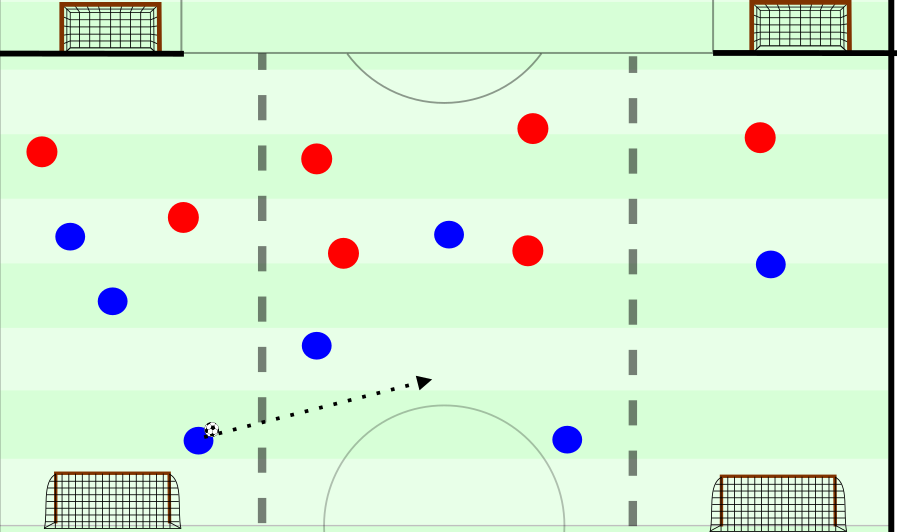 Low possession and low block would conserve energy by not completing many football actions, but you would tire from constant shifting, adjusting and chasing the opponent, not to mention that playing without the ball is mentally tiresome and boring. A possession heavy approach can be useful to conserve energy if the team is coached in “rest-possession” which is very uncommon in England, but football actions still use energy to execute. High pressing can be very energy consuming due to the anaerobic demands of the short sprints, combining this with regaining the ball, and then a football actions leads to a lot of anaerobic demand. A possession heavy approach with good rest possession and a mid-block could be the best solution for conserving energy.

Which factors do you consider when deciding what drills to coach in each session?

My first consideration is always “what do the players need to develop”, I will then work out how this fits into the yearly periodised season plan, through macro, to micro, to meso cycles. If I need to adjust a session topic it could be because it is taking us longer to learn something than anticipated, if something is not appearing in games the way we planned for, or if something has happened in a match situation we need to address having a clearly defined plan and game model allows me the freedom to do this. It’s important to remember that a good plan should be dynamic and open to changes, and that a coach should always build training plans with the idea that by developing the individual, this will in turn develop the team.

Often which sessions you deliver depend on the context, you may coach for an Academy who prescribe what you should be coaching in each block, or you are a participation coach who works with your U7 grassroots team, and your main focus is on them having fun, you plan to do a session, it’s not fun, so it needs to be scrapped etc.

For most situations I would just say, if you can pick drills that will improve your players, your players enjoy them, and you enjoy coaching them, then you are not doing a bad job.

How do you decide if what you see from a team performance is a pre-planned pattern or just a coincidence? How many times does that need to occur before you call it a pattern?

I would say that any actions that happens more than three times could be called a pattern, or something that a coach has asked his team to implement. Obviously, this is a highly subjective question, and will the answer will vary between every coach and analyst, but I would say three times would be a fair number.

How do you improve tactical communication in the final third amongst your players through implicit design of training sessions for them to improve combination play and third man plays?

One way would be using Raymond Verhijen’s football action model as a starting point. I would place players who play near each other on the pitch in the same team in SSG’s, I.E a front three in a 4-3-3 v 2 CB’s & #6. This seems a very basic thought to some coaches but it straight away creates situations where these players must combine and non-verbally communicate in a match-specific situation. By repeatedly creating situations where these players will interact and combine, non-verbal communication will increase.

Below are two articles of example exercises that cover third-man combinations to a depth that I do not have the space to cover here. I cannot recommend them highly enough.

How do you design training exercises to improve numerical superiority in the final third?

I would recommend a mixture of implicit game design and clearly defined explicit coaching to achieve this outcome. One idea could be an 11v11 game on a pitch split into horizontal thirds with a ruling that you must have no players in your own defensive third for a goal to count. This immediately forces players to start at least a 1/3rd of the pitch higher in offensive organisation which then has a knock-on effect to players further up the pitch, it is then up to the coach to bend the practice to their will, be it through more implicit constraints or explicit coaching of where they would like players to be. 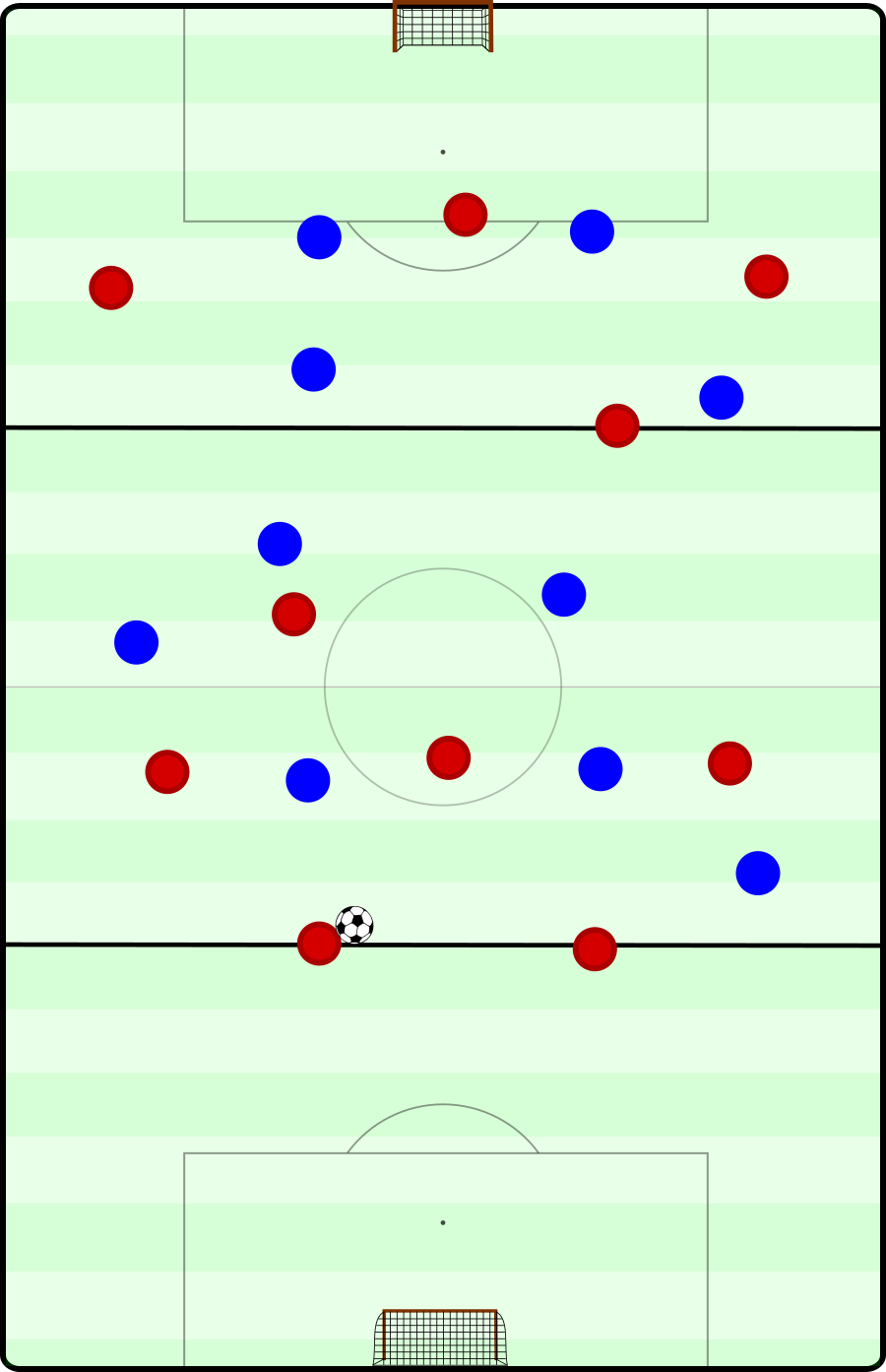 What books can one read to improve tactical theory?

One book I would highly recommend on Football Theory is Jan. W. Tamboer’s book, and indeed anything else published by the WFA.

But, why read books about the topic when your question is hosted on the website with the best tactical theory content? In all seriousness, whilst many books out there are quite useful and good to read, the best information, (and cheapest) can be found on Spielverlagerung, if you have the time it is worth translating the pieces from the German-language website too. Konzeptfussball is another website with lots of high quality tactical theory pieces.

What is your opinion on using touch restrictions and in which types of exercises do they have the best effects on game implementation?

I feel as if touch-constraints can be compared to sugar, nice to eat, but too much is bad for you. As coaches we must be very aware of the situation, context and constraints we are creating from touch-limits. If you are asking your players to play two-touch only in the opposition third, but not explaining why you are asking them to do so, are they really learning the effectiveness of quick-layoffs to bypass pressure, or are they simply doing it because the coach has asked them too? Sure, they may learn from this situation, but the coach has to reinforce the learning.

Touch-limits create situations that coaches often expect players to learn from, but if we do not explain why we are using the limit, or what the limit leads to, the player will not become adaptive to the situation, and simply resort back to old methods once the constraint has been lifted. We use touch-limits to encourage an outcome, if the outcome is achieved for the coach but the player doesn’t understand why, but just thinks they have been asked to play with a touch limit, then the outcome will probably not appear in a game situation without the constraint.

I think these kinds of limits are good in practices that focus on combinations and timing of runs, they are arguably the best way to implicitly create quick combinations, whether this be deep-combinations in early build-up or final third combinations. One issue with touch-limits is they will discourage dribbling, so I tend to only use them in sessions when I want to work on specific combinations, or I will place a rule that a goal scored with a third-man one touch combination is equal to two goals so as not to discourage dribbling.

The final aspect I wanted to touch on is touch limits on shooting. I am a big fan of one-touch finish constraints, I feel like they are a great way to implicitly teach players about how important body position is before the ball arrives to them to score, and for timing of attacking runs, “if the ball is behind them, they have no chance to score”. One touch shooting is a very effective goal scoring method because it often creates situations where the goalkeeper is unable to react to the stimulus of the shooting players body shape, thus leaving them not set for the save.

George Jones works in coaching research and development for numerous Premier League clubs.
He can be found on Twitter @georgejjones.