Bayern make it to the DFB-Cup final over Bayer. Even if the team from Munich don’t do anything special at the moment, they’re especially good at what they’re doing.

Bayern were up by two goals from Robert Lewandowski after only nine minutes, until Lars Bender reduced the deficit in the 16th minute with a header from a set piece. Before the half-time break and at the start of the second period Bayern had to tank Sven Ulreich twice for keeping out strong chances of Leverkusen, before the Bavarians used their chances in the 52nd, 60th and 63rd minute to put the game out of reach with goals from Thomas Müller (twice) and Thiago Alcantara. Leon Bailey goal to put the game back in reach with a strong free kick in the 72nd minute mattered little, also because Müller completed a hat-trick in the 78th minute.

Here’s a synopsis of the important notes from a tactical perspective:

Off the ball, Bayer used a 4-4-2 formation in which No. 10 Kai Havertz moved alongside forward Kevin Volland. They generally interpreted the formation in a midfield press. Depending on the situation either Volland or Havertz pushed higher, while the other oriented himself loosely towards Martinez to block him in the build-up phase. Julian Brandt and Karim Bellarabi on the wings moved towards the middle of the pitch and kept in contact with the defensive midfielders, Charles Aranguiz and Julian Baumgartlinger.

Generally the attacker who was closer to the ball ran at his direct opponent, the centre-back on the ball, to block simple forward passes. Leverkusen then used passes to the full-backs or between the central defenders as pressing triggers. They pushed forward very quickly and switched to a high press. 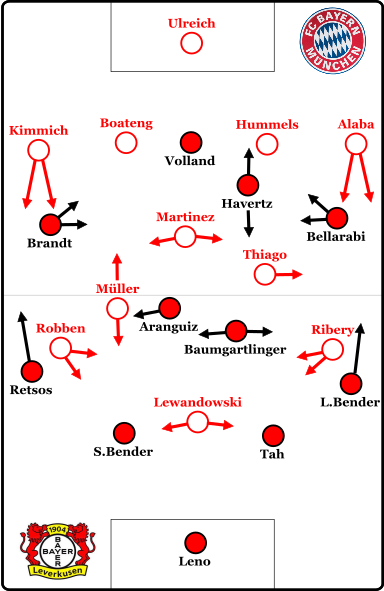 Bayern on the ball: Focus on breakthrough over the wings

Bayern for the most part organised themselves in a 4-1-4-1 formation. Martinez acted as the lone No. 6 in front of the defence and oriented himself close to the centre-backs Jerome Boateng and Mats Hummels in the build-up. In the attacking and transitional phases he occupied the middle of the field to function as a deep pass receiver in their ball circulation. There were two No. 8s in Thiago and Müller, although their roles were constructed differently. While Thiago moved in the deeper left half-space between Hummels and David Alaba in the build-up, Müller often roamed in the right half-space to make himself available for passes. In the attacking phase Müller often positioned himself high up the field and close to the goal to be ready for passes into the penalty area, while Thiago made delayed forward-pushing runs. His role in the attacking play was to keep up the ball circulation.

Franck Ribery and Arjen Robben generally started their movements from a wide positioning to create direct confrontations with Leverkusen’s full-backs Panagiotis Retsos and Lars Bender. Depending on the dynamic of the dribbles of Ribery and Robben, Alaba and Joshua Kimmich in the full-back spots either moved up in the half-space or made overlapping runs behind the wingers. In any case both made a lot of forward-pushing runs. However, they didn’t take on generally high positions to provide width in the final third too often. Instead they moved forward in the half-space in the manner of false full-backs.

In the centre of attack Lewandowski situationally dropped back to function as a short passing option in the transitional phase, but otherwise he oriented himself towards the central striking positions to stand by for crosses.

Namely because Bayern focusses on the dribbles of Robben and Ribery in possession, aiming to, on the one hand, prepare breakthroughs after forays to the goal line or crosses and, on the other hand, force Leverkusen in deep positions, which in turn made their attacks on the break more controllable. The roles of Thiago and Martinez, as well as those of the full-backs, were probably aimed at that particular aspect.

Bayer on the ball: Leaning to the right and attacks on the break as the means of choice

As expected, Leverkusen mainly resorted to attacks on the break through the quick Brandt, Volland, Havertz and Bellarabi. Most of the time they tried to play their attacks from deep defensive positionings in two waves. That is to say that, after winning the ball, Volland would get the ball first, lay off to a player moving up the pitch, and only then they would attack the deep spaces behind Bayern’s defensive line.

Seeing as Bayern employed a midfield press off the ball for large portions of the game, though, Leverkusen also had some spells of possession. In those, Baumgartlinger and Aranguiz oriented themselves deeply and in close vicinity to the centre-backs. Aranguiz often moved backwards towards the left. In those static instances, full-backs Retsos and Lars Bender moved up the field to provide width in the final third, thus allowing Brandt and Bellarabi to move inside the half-spaces, where they roamed between the lines looking for gaps.

The Bavarians kept to their 4-1-4-1 formation from possession spells off the ball as well. When Bayer circulated the ball, the player closer to the ball between Thiago and Müller moved alongside Lewandowski to disturb Leverkusen’s centre-backs or the two defensive midfielders in the build-up and transitional phases. Martinez generally kept contact to the defensive line or oriented himself towards Havertz and only defended his dropping deeper when he received the ball.

Situationally, though, Bayern also moved up. In those cases, Robben and Ribery often put Retsos and Lars Bender in their cover shadow and ran at the two Leverkusen centre-backs, guiding them inside. Usually, however, it was Lewandowski who moved forward first, whereas Thiago was positioned a bit deeper controlling the gap between the two centre-backs, so that the centre was unavailable. Müller oriented himself towards his opponent and Martinez towards his own defensive line, thus resulting in 4-1-3-2 formations.

After the break, Leverkusen introduced Leon Bailey for Retsos. With that, Heiko Herrlich changed the formation to a 5-2-1-2. Bailey played as the left wing-back, while Brandt took that spot on the right flank. Bellarabi became the right-sided striker, Volland the left-sided striker. Havertz continued to act as a No. 10 in the centre. In possession, Leverkusen resorted to foorcing rebounds using the 2-1-1-block and simple forward-runs over the wings.

Off the ball they seemingly wanted to gain better access to the dribbles and attempts of break-throughs of Bayern through Robben and Ribery, which generally worked. Seeing as Thiago played deeper now, though, and Bayern nominally moved to a 4-2-3-1 formation, Leverkusen rarely had access to Bayern’s transitional play. Thiago and Martinez both moved far down the flanks and supported the ball circulation there, or connected it backwards to the centre-backs. Leverkusen thus failed to prevent diagonal attacks of the Bavarians from the wings into the spaces between the lines. Additionally, they wanted to create more direct assignments in the centre, particularly to put Bayern’s build-up under pressure more quickly and consistently.

After conceding three goals, Herrlich changed back to the 4-4-2 formation from the start of the game around the 70-minute mark.

Bayern are on a strong run of form: Next to the fact that they perform basic tactical patterns very consistently, they impress through the form of their individual players. That aspect doesn’t just pertain to actions on the ball, but to other factors as well, like the individual and group-tactical behaviour on and off the ball or the mental freshness in offensive and defensive transitions. Against this Bayern team, an actually solid performance of Leverkusen was simply not sufficient.

This article was written by RT (@Tobias_Robl) and translated by Lars Pollmann (@LarsPollmann).