Despite new signings Henrikh Mkhitaryan and Pierre-Emerick Aubameyang–and despite a seemingly narrow result–the North London derby was a straightforward affair. Thanks to superior positional play and clever pressing, Spurs were able to cement their dominance in the north of London. 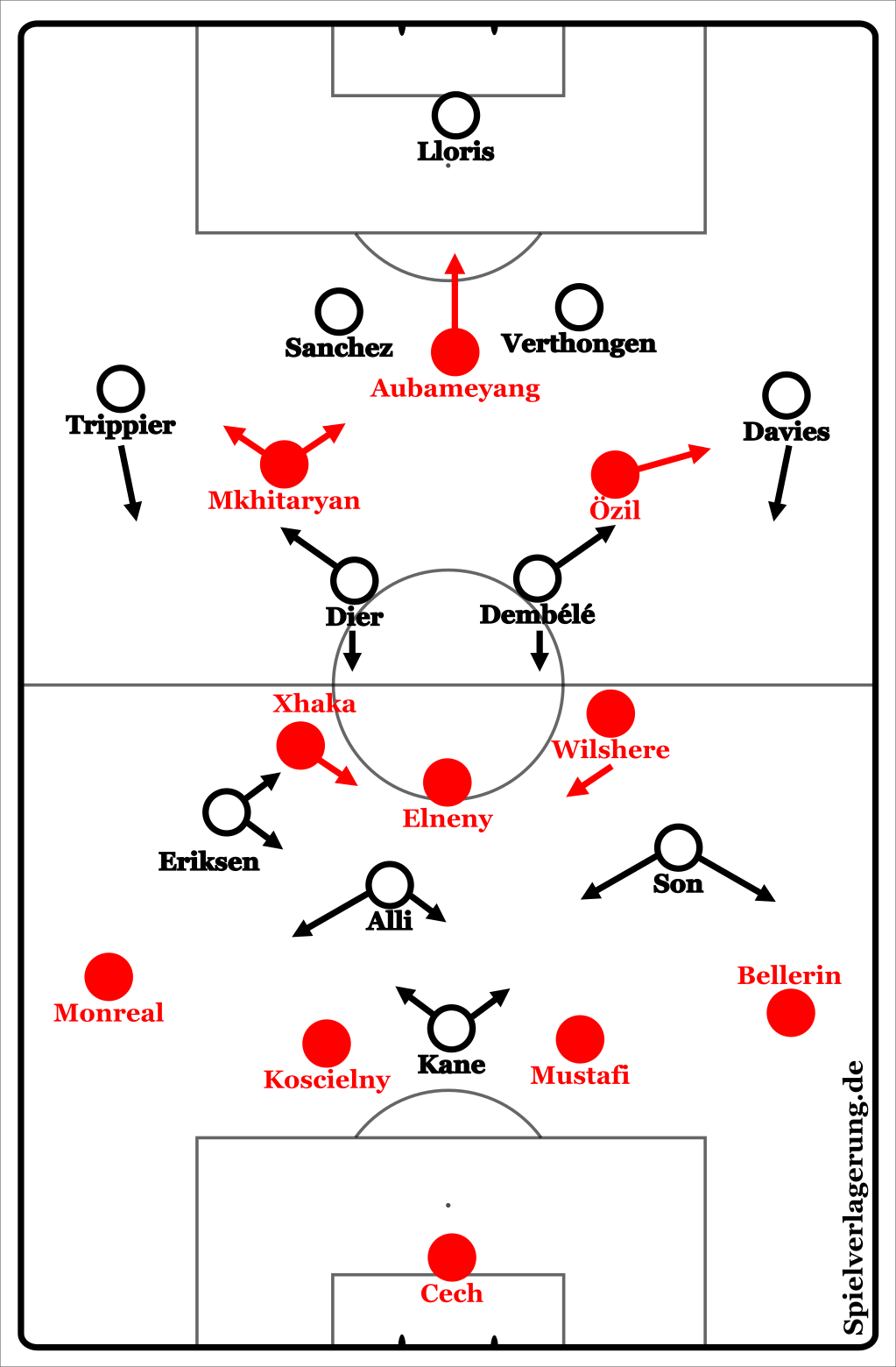 The debuts of Aubameyang and Mkhitaryan had gone perfectly: Arsenal smashed Everton, 5-1. Mkhitaryan scintillated with three assists, colleague Aubameyang scored a goal. Something like hope burgeoned for many fans of the Gunners. The season had been rather forgettable to this point: No UEFA Champions League appearance, elimination from the FA Cup at the hands of Nottingham Forest (4-1), only sixth in the Premier League–and four points behind arch-rivals Tottenham Hotspur.

Spurs, on the other hand, looked back on a strong string of 11 matches without defeat and wanted to increase their advantage over Arsenal further. To achieve that goal, Mauricio Pochettino reintroduced no fewer than 10 players that had been rested in a 2-0 win over Newport County in the FA Cup. Only Son Heung-min remained in the starting XI.

Wenger emphasised how important this derby would be for his team. Accordingly, the Arsenal manager chose a starting line-up that spoke of the respect for his opponent. Mesut Özil moved to the central-right position in attack, with three central players behind him in Granit Xhaka, Mohamed Elneny and Jack Wilshere. Surprisingly, Elneny was both the most central and deepest player in Arsenal’s central midfield.

The Gunners’ approach to the game, pursuant to Wenger’s indication, was characterised by caution and restraint. Especially against the ball, Wenger’s men often remained very deep and let the hosts gradually push them towards the back. However, it was not as if Arsenal parked the bus from the first whistle.

Indeed, they did press higher up the field in the initial build-up phase. That high pressing, though, was, objectively, simply implemented terribly. At the top of the formation, Aubameyang again and again followed smart arching paths to run at Davinson Sanchez on the right side, but his runs were almost never integrated by the rest of the team. Arsenal’s pressing consisted for the most part of frenzied, man-oriented runs of Wilshere, Elneny and Xhaka. All three midfielders left their position frequently to pursue their opponents over large spaces. Against adaptable Spurs, this was definitely the wrong approach. Christian Eriksen, Dele Alli and Son managed time and time again to run and create gaps in Arsenal’s pressing by undocking from their markers.

This allowed Spurs to quickly bridge a lot of space and often they moved into the opposing half with all 10 outfielders. Once Tottenham moved the ball over the half-way line, they had a remarkable focus on securing those attacks. Full-backs Ben Davies and Kieran Trippier were only allowed to move up the pitch if one of the two No. 6s moved back into the half-spaces. In that manner, Spurs repeatedly built a false back four, in which either a No. 6 and a full-back protected the centre-backs on the wings, or, at times, even both No. 6s took over those coverage responsibilities. That, in turn, allowed more attacking power with both full-backs without weakening the team’s “rest-defence” (referring to how a team’s attacking shape by the “rest of the players”–mainly those not involved in the attack–assists in defence). Through this focus on securing attacks, Spurs quickly came to be quite dominant and seized power over the game. They forcefully pushed Arsenal into their own half and the Gunners were never able to free themselves. This was also down to the fact that the visitors punted the ball away after winning possession almost all the time.

This was another opportunity to realise Wenger’s respect for his opponent. They simply did not have the courage to outplay Spurs’ counter-pressing and tried to bring the ball to alleged safety with long balls. But instead of that security, fans of the Gunners had to watch their team lose control more and more and Spurs getting stronger as the match went on.

Complicating things even further was Arsenal’s dubious rhythm in defensive pressing. They were often situated near their own box but their pressing from this deep defensive positioning was panic-stricken. Particularly the movement of the first players who pressured were neither secured nor executed very well. Often times they made simple vertical runs towards the ball-carrying player, which opened the zone behind the highest pressing player and exposed spaces between the lines. Spurs constantly occupied those spaces well and were able to release in the blind spot of the advancing player, allowing Tottenham to effortlessly move across the opposing lines.

In that process, Pochettino’s team banked strongly on their own interpretation of positional play. As mentioned above, securing their own attacks had the highest priority. Mousa Dembele and Eric Dier showed great restraint and full-backs Davies and Trippier also did not planlessly occupy the final third, rather the team always prepared attacks delicately. 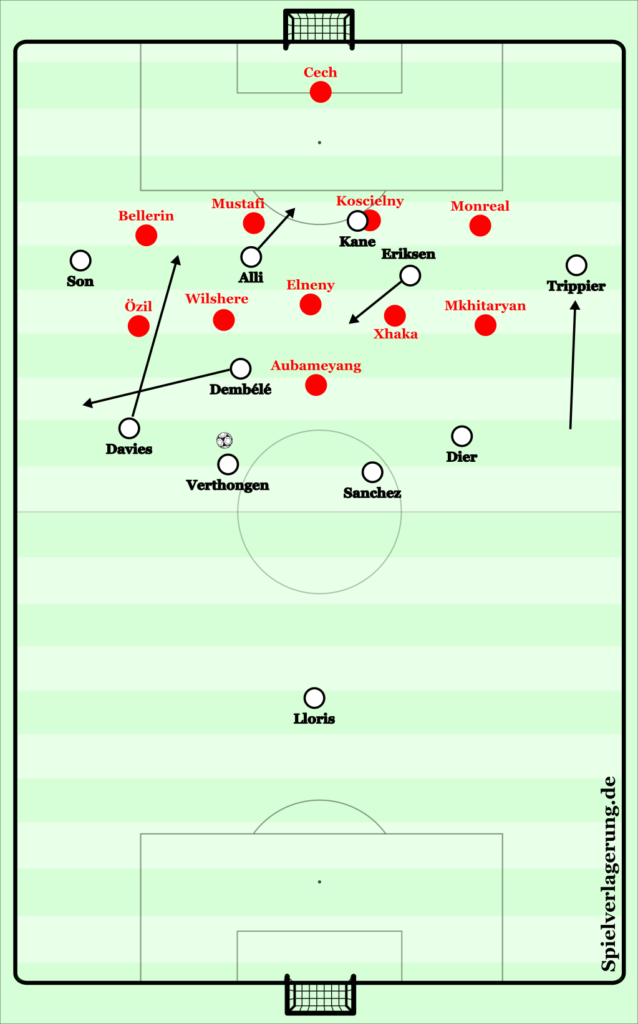 That is how Tottenham’s positional play looked. Dier or Dembele protected the full-back next to them. Son drifted wide, while Eriksen moved into the centre.

The types of players in Spurs’ attack were particularly decisive in that. On the right side they had a nominal winger in Eriksen who is much more comfortable in half-spaces than on the flank. Logically, one spotted Eriksen in the right half-space frequently. This, in turn, made it possible for Trippier to push forward consistently, where he aimed to fill the role of the player giving width on the right side of the pitch. To allow him to do that, though, first Dier had to move in the right defensive half-space next to the centre-backs to secure the attacking move. Spurs’ movements on the right wing were thus prepared well and the positioning was always executed cleanly, but one could still say they were predictable attacking movements. When Dier moved back towards the centre-backs, his counterpart Dembele moved up a line forward, most often between Aubameyang and Arsenal’s midfield.

On the left side, the hosts’ positional attacks were a bit more multi-variant. That was chiefly down to left-winger Son. The South Korean is more of a dribbler and a player who gives width, but he is also very comfortable in half-spaces and in the box, “or the No. 9 spaces.” Accordingly, Son either roamed in the half-space or on the flank on the left side of the field. Depending on which space Son occupied, Davies joined in on the attack. With Son often standing close to the touch line as a dribbler, Davies pushed into the left half-space. Of course, only once Dembele had secured his position accordingly. Not uncommonly Spurs’ attacks moved seamlessly from the right to the left side, while positions were again and again changed and adjusted fluently and cleanly. This caused enormous problems for Arsenal as they attempted to defend the spaces between the lines. At the same time, it allowed Arsenal to deftly release the wingers.

Up top, finally, there was a large fluctuation between Alli and Harry Kane. Both managed to often create spaces for themselves through simple switches of position. It has to be noted that the two England internationals have excellent feeling for spaces. Different spaces opened up for Alli and Kane particularly through the wingers’ asymmetric playing style. They knew to use them impressively well and even evasive runs toward the sideline–mainly from Alli–barely destabilised the hosts’ attacking formation.

Mkhitaryan as the only means against the “rest-defence”

The fact that the Gunners were not completely hopeless in the game was mainly down to Mkhitaryan. Arsenal had to rely on counters based on their approach to the match and, as mentioned before, Spurs’ “rest-defence” was always organised neatly. It is a tremendous help, then, to have a Mkhitaryan in your ranks; someone who identifies opposing structures better than almost anyone and knows how to prompt opponents to come out of their formation. With that, he also often forces the opponent to contract close to the ball, only to pass the ball at the right time and open up spaces away from the ball. 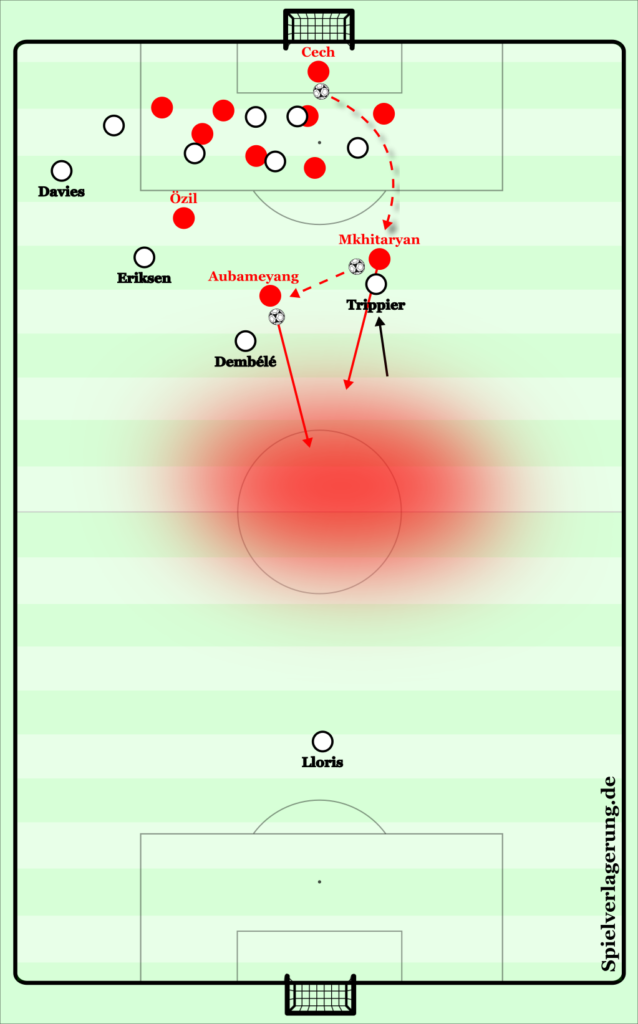 Situation following a corner kick. Cech saved the cross and threw it towards Mkhitaryan, who lured Trippier and immediately played the ball to Aubameyang. What followed was a promising 2vs2.

Arsenal are stuck. No development can be observed despite expensive new arrivals such as Alexandre Lacazette, Aubameyang or Mkhitaryan (even though he strictly speaking came free of charge). Even the “new-signing effect” of Aubameyang and Mkhitaryan seems to have fizzled out after just one game. Wenger supposedly did not approve of those two transfers, by the way–apparently because of the age of the two former Dortmund players. A lot of things point toward a split between Arsenal and their dyed-in-the-wool manager.

Tottenham, on the other hand, seems to continue to develop four years into Pochettino’s tenure. After defining themselves through (counter-) pressing in the Argentine’s first year, they constantly improved their play in possession over the last seasons–despite important departures such as, recently, Kyle Walker’s. It would hardly be a surprise if St Totteringham’s Day were to be cancelled for the second time in a row.

This article was written by MO (@MomoFalco) and translated by Lars Pollmann (@LarsPollmann).

If both your sixes drop to cover the full backs then there is a chance of leaving your center unoccupied which is quite dangerous?

Usually yes but Tottenhams last line was very high up the field so the centerbacks could easily cover those spaces in front of them. Also most of the time only one fullback was advancing so Dembélé or Dier could remain central.

Fantastic analysis. I’m a Tottenham fan so I watch every match but I could not hope to articulate their play so clearly. Great work. Danke.