A wasted first half of the season, outstanding performances after the winter break. FC Augsburg’s inspiring tactical direction and the resulting style of play is something to marvel at. We are going to look at their chances to avoid relegation during the last two games.

Spielverlagerung runs a special on the relegation fight in the Bundesliga. We briefly analyse the clubs threatened by relegation and predict their chances in the two remaining games.

Augsburg’s Development and Their Midfield

The club from Bavaria’s Swabian west bookended the table after the first half of the season, far behind the rest of the field and tied for points with Greuther Fürth. However, they had rarely been as inferior as the table suggested. They had been lacking consequence and the ability to assert themselves in contested games. 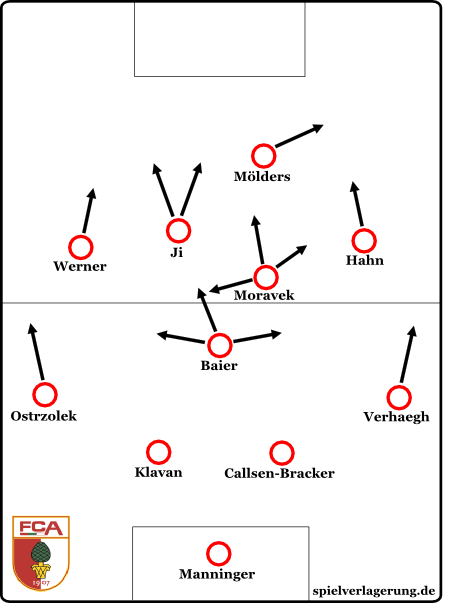 Augsburg’s basic formation during the second half of the season.

Beginning with the second half of the season, coach Markus Weinzierl made some changes and finally tapped into the potential of Augsburg’s highly interesting and richly talented squad, something that we had been hoping to see for some time. FCA played a tremendous second half of the season with a 4-3-3/4-1-4-1 formation and an exceedingly unique midfield and came close to the safe havens of the table. FCA occupying the seventh place in the second half table is no coincidence. They have already received high praise from Freiburg coach Christian Streich, who currently counts Augsburg among the six best team in the league. From this vantage point Augsburg differs from their competitors, because they are in good form and show unusually few problems for a relegation candidate.

The midfield we mentioned earlier is so unique, because it is formed exclusively by creative and offensively minded players. Daniel Baier, an underestimated former attacking all-rounder, who frequently played the role of winger and ten, is the sole six – with success. In combination with his current midfield partners Moravek and Ji, Augsburg can boast about one of the best midfield as far as playing ability, technique and intelligence are concerned, even though the brilliant Koo is absent due to injury. Moravek, a Czech and everything but “integrated” into the tactical concept during the first half of the season, has the environment he needs in midfield. He is not forced to act alone and strategically as active central play-maker, but can be “directed” by his highly able colleagues.

We plan a detailed analysis concerning the mechanisms and interplay as well as the general potential and problems of such a style in central midfield after the end of the season – my colleague MR will look back and sum up.

With Baier against Bayern

This midfield will play a crucial role during Augsburg’s next game. During the decisive days of the relegation fight, Weinzierl’s men have to take on the record champions as they are handed their trophy.

Still, Augsburg, with their creative and able midfield, stand a relatively good chance of playing around Munich’s brutal pressing. All three central players know how to treat the ball, are capable of resisting Bayern’s pressing-pressure, are much more able able to spot potential “dead space” within the Bayern concept than most other players in the league and could surprise Bayern and their strong anticipation with unorthodox plays. Their central defenders do not shy way from difficult passes either.

In defence Augsburg’s midfield might be able to cause Bayern unexpected trouble as well. The advantage of such a formation lies in the able and intelligent midfield’s ability to use their attacking “thoughts” to gain advantages in defence. Especially players like Daniel Baier are able to think like the Bayern players, guess at their attacking plays and anticipate certain actions. It becomes easier to counter Bayern’s movements and patterns the closer a team’s midfield players resemble the able Bayern players. 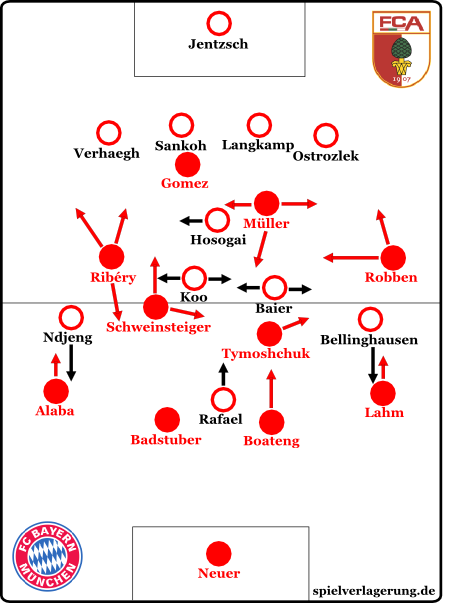 Augsburg basically already showed this concept during their away game in Munich at the end of last season. Back then, their midfield of Hosogai, Baier and Koo, a composition slightly stronger in defence, made life as difficult for Bayern as barely any opponent had managed in Munich. Defensive fluidity combined with intelligent cutting of passing channels allowed the Augsburg team, then still coached by Jos Luhukay, to condemn the Champions League Finalist to a completely innocuous first half.

If any Bundesliga team outside of Dortmund, Leverkusen, and with some reservations Freiburg and Frankfurt, can annoy Bayern, it would probably be Augsburg. Their greatest problems in defence should be that their current midfield plays higher up the pitch schematically than the midfield last season did and that Bayern intensified the very focus on the wings Heynckes used a year ago to force a narrow victory.

If Bayern are able to play on the flanks and break through to the goal line (Lahm, Alaba, maybe Ribéry), so that the usual balls in front of the box become possible, Augsburg might have difficulties to move their midfield back fast enough to maintain a compact shape. In theory Baier is well suited to anticipate and clear such balls with his overview of play, his feeling for space and his anticipation, but the midfield has to return quickly enough. Augsburg did recently retreat effectively against Freiburg when their highest line had been outplayed – how well they implement this against Bayern remains to be seen.

Augsburg versus Fürth and their man orientation on the wing

From one end of the table to the other: after the game at Bayern, Augsburg face already relegated Fürth on the last game day – three points are likely a must. This game offers very different challenges. One of the key questions is how Augsburg is going to deal with the familiar man orientation by Fürth, although currently it is not employed as constantly and consequently as under Büskens.

Fürth’s style is unpleasant for a strong team able to play well in restricted space, but Augsburg’s attacking qualities should suffice to break the Spielvereinigung. Provided of course that they consequently finish their combinations and are not looking to finish early, an occasional negative occurrence.

The role of the Augsburg fullbacks could be the central aspect versus Greuther. They could open much space with a higher and more attacking basic position against the Fürth flanks. There is potential to look great against last placed Fürth if such situations are being created – if the open connected space is occupied, something Augsburg’s midfield should be well suited for.

Lately the Spielvereinigung as a whole has stabilized under Frank Kramer and was able to emphasise the (belated) positive trend with well played games and two wins. The team has established a steady line-up for the final phase of the season and was able to create some well-oiled attacking mechanisms as a consequence. 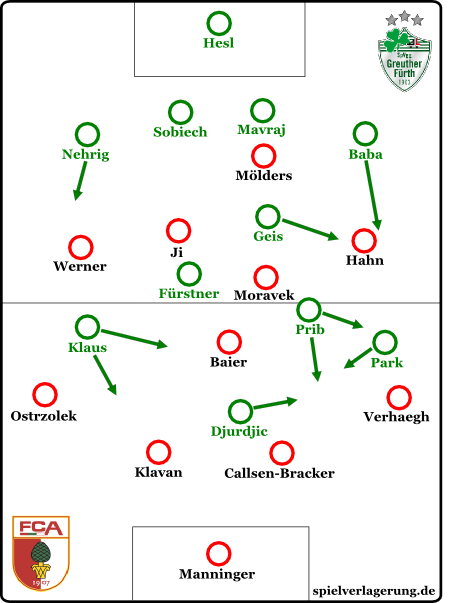 Geis, Fürstner and Prib form an intelligent and functional midfield able to support the attackers in different situations. Prib tends to drift persistently to the left flank, which Fürth tries to overload, as does Geis, the most defensively minded six. Fürth frequently outnumber opposition on the left with the advancing Baba, the side-switching right-outside player Klaus as well as the flexible and technically strong Djurdjic. In addition they have ceased to conclude these situations with clumsy, constant crossing – Fürth mostly covers and restores balance.

Supplying these attacking structures is the great problem facing Fürth, as it was during the first fixtures of the season. The defenders, with the positive exception Sobiech, build up badly and still play a lot of long balls, in many games more than 20% of all passes are long passes. Even though Fürth’s improved compactness on the left helps to gain many rebounds through counterpressing, the basis for their left-sided focus is still unstable. During their last three fixtures they benefited from relatively loose opposition formations, which meant the “Shamrock’s” problems opening play did not matter as much.

If Augsburg manage a defensively compact performance, they should be able to control their relegated opposition even without the ball, despite their improvements. It should be possible to prevent Fürth’s defenders from passing into midfield and to provoke long balls with the solid pressing combined with clever use of covering shadows that Weinzierl’s squad has developed. If the collective Augsburg squad adapts well to Fürth’s left-sidedness they should have less trouble (generally and fighting for rebounds) than the last teams the Franconians faced.

FCA will likely win the last fixture against relegated Fürth – possibly three crucial points. Augsburg’s chances against Bayern also depend on Bayern’s line-up. Does Jupp Heynckes field “only” those players who do not play as often or does he field the protagonists of this successful season for the Meisterschalen-Handover? All in all Augsburg stands a relatively decent chance to steal at least one point from the almost overpowering record champions. FCA will have a though fight with Düsseldorf on their hands, but with a three-pointer against Fürth and maybe a bonus against Bayern they will not only avoid direct relegation,but also the play-offs. They are deserving of the 14th or 15th spot because of their style during the second half of the season.

Concluding remark: This text is a little shorter than the previews about Bremen and Düsseldorf, because it was not written as a team analysis concerning general aspects, but is limited to the immediate future and concrete opportunities. Concerning a general analysis I want to mention MR’s plan again. For those unwilling to wait any longer I recommend my colleague PP’s analysis of the recent Augsburg – Freiburg game. He writes about some general aspects, like Augsburg’s pressing and alternative attacking strategies too, which were left out of this piece.