Eintracht Frankfurt against Inter Milan looked to be one of the most interesting ties of the Europa League round of 16. Adi Hutter’s men have had a good run of form domestically, and dispatched of Shakhtar Donetsk with relative ease in the previous round having gone through the group stages with 6 wins out of 6. Their good form continued here, but with the game ending 0-0, they face a difficult task in the second leg.

Frankfurt initially seemed to take a slightly more reserved pressing approach than they had in previous matches. Jovic and Haller took their position just in front of the Brozovic, Inter’s deepest midfielder, initially looking to block passing lines into central areas rather than directly pressure the Inter defence. This allowed the midfield three to cover the deeper areas, with reduced responsibility in pressing forward.

While this approach was fairly successful in limiting Inter’s possession game, it did lead to some problems for Frankfurt with regards to the match cycle. The passivity of the home side’s approach allowed Inter a territorial advantage, which then made attacking transitions more difficult for Frankfurt, who now had to travel 60-70 yards to reach the Inter goal.

After the initial stages of the match, Frankfurt reverted to their more aggressive approach. Now, Adi Hutter’s side looked to pressure Inter’s build up at an earlier stage, even in and around the visitors’ penalty box.

To do so, Frankfurt used a heavily man-oriented approach. Jovic and Haller always retained access to the Inter centre backs as a priority. Da Costa and Kostic played as wide midfielders rather than the wing backs you might expect in a 3-4-1-2. This meant that they would look to press the Inter full back when the ball was on the near side, and move towards the centre when the ball was on the far side, staying on what was the “midfield line” and maintaining a connection to the midfield three. In midfield the approach was slightly more flexible, whilst still man-oriented. From an initial 1-2 staggering, the eights (Rode and Gacinovic) had to situationally gain access to Brozovic who mostly acted as a single six in possession. They did so in a planned way at goal kicks, where Gacinovic would be the one to move up and mark Brozovic, whilst in open play it could be either of the eights, based on proximity as Brozovic became a passing option.

This approach left a 3v3 situation on the back line during pressing. Whilst this is a fairly unorthodox approach, Frankfurt were able to use it effectively. Firstly, while most teams prefer to have one extra player on their back line, Frankfurt’s willingness to forego this allows them an extra player to use in higher areas. As a result, the opposition have greater difficulty in breaking through the Frankfurt press, allowing Hutter’s side to either win the ball high through their pressing, or force the opponent to play long.

The outcome of this was, as expected, Inter being forced into a large number of long clearences. In these situations Frankfurt could rely on the aerial dominance of their defenders, particularly Hinteregger and N’Dicka, to win the first ball. They could then create a structural superiority in order to recover the ball. Their wide midfielders started initially slightly narrower than the man they marked to cover the central areas, whilst being close enough to maintain access to their man. The midfield three and front two would all mark their opponents closer, but were consistently on the defensive side of their man, and quicker to recover to the area in which the ball would drop.

Frankfurt recover well towards the ball

The success of Eintracht’s approach allowed them to take control of the match, denying Inter the chance to keep possession and look to create chances. One  moment in which the weaknesses of Frankfurt’s approach became evident was the build up to Inter Milan’s penalty award, an opportunity the Italians were unable to convert.

In the initial build up, Jovic and Haller moved up to press the Inter centre backs, having initially been in a deeper position. Under pressure, the ball was moved to Asamoah who had dropped onto the back line. Asamoah had time to receive and play the ball into midfield having escaped Da Costa’s access. Jovic and Haller’s movement to press had left Brozovic in space. Neither Rode nor Gacinovic had immediate access to the Croatian, a result of Frankfurt’s midfield staggering and the lack of reaction to move up behind the front two in pressing to maintain suitable distances. Rode eventually moved up to press but had to cover too much ground, allowing Brozovic an unopposed first touch and time to scan for passing options. Brozovic’s choice to backheel the ball to Vecino fooled Fernandes, who was again late to arrive in pressing having anticipated a pass in the opposite direction. Inter then used a quick combination to break Frankfurt’s man marking. Vecino lured Fernandes into rushing to the ball by delaying his pass, before releasing the ball and quickly working against Fernandes’ momentum move away from his marker. Perisic’s deep position also lured Hinteregger out of the back line before releasing Vecino to run towards the remaining defenders. Ahead of Vecino, a 2v2 remained on the back line, and the Uruguayan then switched the ball to the far half-space where Politano was open on the outside of the Frenchman, perhaps partly as a result of Frankfurt’s lightly occupied last line. N’Dicka was able to delay the winger, but could not stop the pass back across the box, resulting in a penalty award.

A large number of Frankfurt’s most dangerous attacks came as a result of Inter Milan’s midfield, and their positioning without the ball. This was an issue both in organised moments, as well as in Milan’s defensive transitions.

This issue was caused by the almost excessive ball orientation of the Inter midfield, as well as the natural lack of cover that comes with a man-oriented approach. Inter’s midfield three would initially look to man mark their opposing midfielders when Frankfurt were in possession of the ball. The problem for Inter was when another Frankfurt player became free. As the visitors’ midfield moved to apply pressure to other players close to the ball, one of the Frankfurt midfield, most often the far 8, would no longer be marked. This was prevalent when Frankfurt had the ball on the wing, meaning the Italian side’s midfield three would be drawn to one side of the pitch, and a Frankfurt player would become free in the centre or far half-space. This was not helped by Perisic who, as the ball far winger, rarely provided quick enough cover for his midfield moving towards the right. 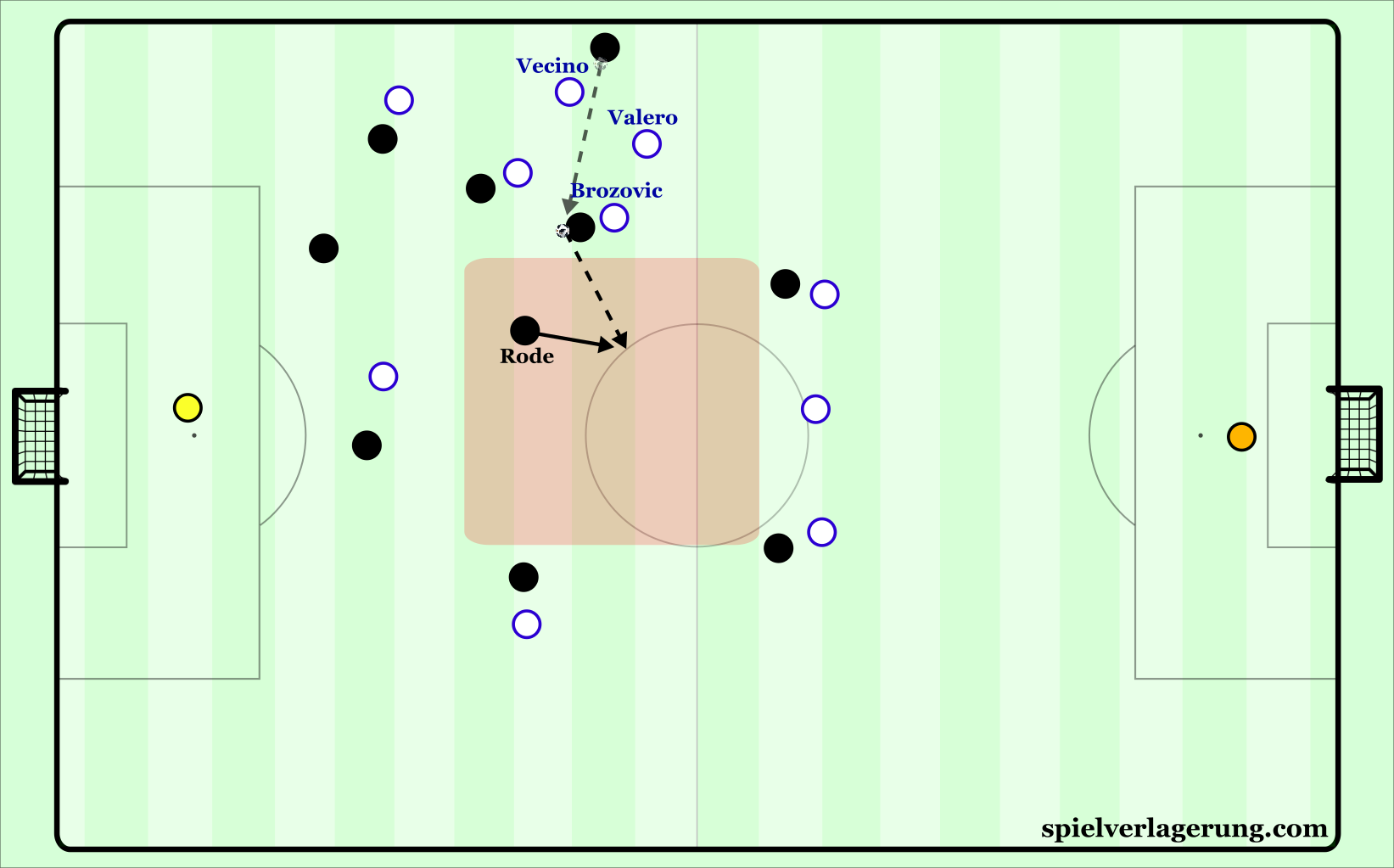 Frankfurt were effective in exploiting this, using a number of tools to find the free player in far spaces. N’Dicka, and particularly Hasebe, who was thoroughly impressive, were able to find long diagonal passes to the free man at times. Mention also has to go to Kostic who often attracted and escaped pressure with his dribbling, and Jovic who would drop to overload the central space, before either receiving the ball or further freeing a teammate.

Despite their superior performance, Frankfurt were unable to make this count in regards to the scoreline. This wasn’t helped by the referee who failed to award a clear penalty to Adi Hutter’s side in the second half. As a result, the Germans will travel to the San Siro with the tie very much in the balance in the second leg.

everything was good actually, the reason i replied just to mention that the stadium is Giuseppe Meazza Stadium, when Inter hosting there, San Siro is for milan AC. Thanks